The simple answer is "lots of meat"! The 1800s (the Regency period of English history) is a time of grand banquets and dinners much more elaborate than what many of us can conceive of.

Those not so well off would consume mainly pork products: bacon, sausages, ham made into stews and pies. The middle classes added beef and mutton to the list of meats and if you were really well off, then chicken, duck, wild fowl, venison and all manner of fish and seafood would appear on your dinner table along with a few vegetables, lots of sauces, pastries, jellies and other sweets.

For breakfast you'd eat either bacon and eggs, cold roast beef or ham or - especially if you were a lady - hot chocolate and a roll with butter, or tea and toast.

Dinner, the main meal of the day and one that since the Middle Ages had been served in the middle of the day, began to move back towards 5 o'clock or even later if the household was very fashionable one. Judging by the quantity of food served, dinner was still the main meal of the day. Numerous dishes were served, often starting with soup and various entrees - pidgeons in white sauce, sauteed mushrooms or asparagus in breadcrumbs for example. The next course could consist of roast chicken, baked salmon, a venison pie, sweet and savory pastries and a number of sauces. The interesting thing about Regency dinners is that both sweet and savoury dishes would be served as part of the same course. It was only the last course at each dinner that consisted mainly of sweets, pastries, jellies, ices, nuts and fruit.

To cover the gap between breakfast and dinner nuncheon, and eventually a light lunch, were served, usually consisting of cold meats, fruit and sweets.

And late at night, you might expect to be offered supper. This could be a light meal or something rather substantial, but some of my favourite "savouries" such as angels on horseback or devilled kidneys originated during the 1800s.

And as for drinks... Water was not considered safe to drink and milk was for children or invalids. Tea, coffee and hot chocolate were popular drinks for breakfast time, though many men began the day with a tankard of ale and a plate of cold roast beef. Lemonade, orangeat or barley water were offered as refreshments during the day. And, of course, everyone drank alcohol - sometimes in alarming quantities. During dinner and supper numerous different wines (hock,champagne, burgundy or claret) would be served. After dinner, men would drink brandy or port. Rum punch warmed you when it was cold outside. Various alcoholic mixers were served at dances and balls and along with sherry, madeira and sweet liqueurs. Ale was drank across the population and gin was a widespread drink amongst the lower classes. 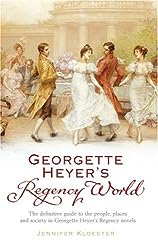 If you'd like to know more about England during this fascinating time, you could start with this very entertaining book.

It's not just about food, either.

You can learn what to wear, what to drive, how to speak and what sports to play. You can learn where to shop, how to dance and where to find an eligible husband. There's also a detailed who is who of the era - just in case you bump into people!

And it's also available from Amazon.com

for all English history lovers outside of the UK!