Things to do in England
Watching the London Nocturne at Smithfield

The great thing about things to do in England is realising that having a wonderful time doesn't have to be expensive. Many exciting or iconic events - the Lord Mayor's Show, the Boat Race, the Tour of Britain and many local festivals and fetes - can be attended free of charge, while others cost only a token amount.

Case in point is the London Nocturne, an annual city cycle race event.

Over the last few years, London has really embraced cycling as a form of transport, as an exciting spectator sport and - of course - a great sport to compete in. The London Nocturne brings all of that together, adds a splash of quirky Englishness and turns it into an excellent evening out.

So, what is the London Nocturne, really? It's a series of cycle races run on a tight, short, closed-off circuit besides the iconic Smithfield Market in East London one Saturday in June. Well its was a Smithfield Market in 2014, but in later years the circuit has moved around.

We like to explore a little whenever we come down to London and that Saturday was no exception. The weather was warm, the forecast rain didn't make an appearance and instead of a dash from the underground clutching an umbrella, we got in a lovely walk from Green Park to Piccadilly, through Chinatown and then down Shaftesbury Avenue and Aldgate towards Smithfield. 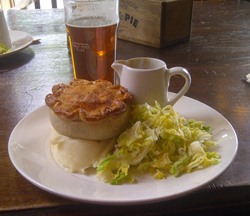 One of the things I love about London is the way the neighbourhoods change so visibly - Chinese to Italian to Middle Eastern to office buildings with coffee shops and noodle bars - all in the space of a couple of miles or so.

Despite the gentle meander, we made sure we got to Smithfield early and secured not just a great place to watch the racing just beyond the start/finish line, but a wonderful early dinner of pie and mash at the rather nice sounding pub the Butchers Hook & Cleaver. This is a Fullers Ale and Pie House and was very traditional inside.. Pie and mash is a London institution and ours was a lovely pick-me-up after our walk and lack of lunch - and especially with a pint of ale (warm beer to those of you who don't understand!).

I would have loved a closer look around Smithfield Market, since his has been on my list of things to do in England for a while.

What is now the UK's largest wholesale meat market and one of the largest in Europe, was once the place where jousts and tournaments took place. In fact, Smithfield has seen much blood in the almost 1000 years of its existence:

Fortunately, Smithfield was defined by more than just blood and guts, or I'd be worried of meeting a few ghosts after the sun went down. Actually, for most of its existence Smithfield has been a weekly livestock market. It's also been the location for the Bartholomew Fair - an annual three day fair that was established in 1133 and eventually grew into the largest cloth fair in England.

In 1860, Sir Horace Jones, the City Architect, was asked to design the new market building. His work so pleased his employers that he was later asked to design Tower Bridge! 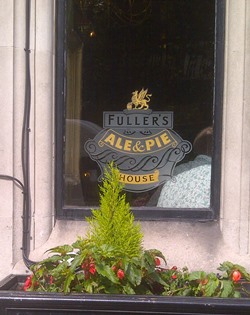 So yes, Smithfield has a lot of history and I would really have loved a closer look, but the site was already fenced off for the racing... so we have to come back another day for some close-up images of Sir Horace's market building. 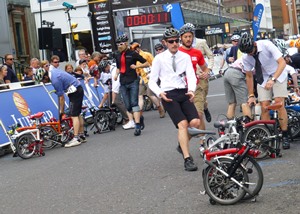 The racing got underway while it was still light and with music and refreshments easy to come by and many many families out with their kids, the atmosphere was great!

We aren't bike race novices - not by a long chalk! - but neither one of us had ever watched a folding bike race!

Having to assemble a folding bike after a Le Mans start and while wearing office clothes before racing off around the circuit was a sight to behold. And the racing was suprisingly fast and furious.

The London Nocturne is all about turning cycle racing into a great, exciting night out - and we thought it succeeded admirably. If you've been to London, you'll have seen the rows of blue bikes you can rent to get around the capital. In honour of London's charismatic mayor, the things are known as Boris Bikes, and yes - you can race those too. Just as competitors at the London Nocturne raced track bikes without brakes - an amazing race, that one! There was also a vintage bike race, a competition for the best turned-out vintage rig and my favourite - the Pennyfarthing race.

If you don't know, a Pennyfarthing is a bike with one very large and one small wheel. Tricky to climb on and off of and probably just as tricky to ride, I'd had no idea that so many of these old bikes existed. But apparently, riding Pennyfarthings is a "thing" and they are also popular for racing.

And whatever you may think about them, watching the racing was exceptionally good fun!

With the likes of Ed Clancy, Tyler Farrar and Dean Downing in the pack, excitement was guaranteed. Add a fired-up, enthusiastic crowd, a tight circuit and floodlights...and it's no wonder that a good time was had by all, riders and spectators alike. 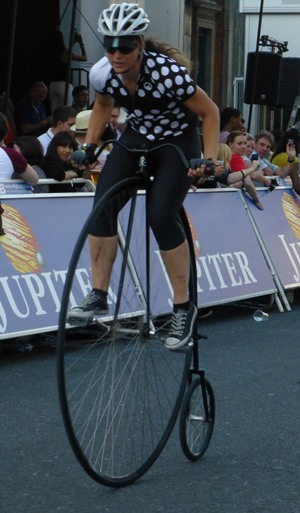 Action in the Pennyfarthing Race
© essentially-england.com

And now for the important part: what did we have to pay for our day out? Nothing beyond train fare, dinner and a few drinks. The London Nocturne is one of those things to do in England you can attend absolutely free... and that's just the way we like it!

You can find other ideas for things to do in England on the Fun Days Out page.