Apple Charlotte is another of England's wonderful ways to turn leftover bread and a few apples into a terrific, tasty pudding. It is a simple pudding, consisting of nothing more than apples, sugar and stale bread.

But the resulting marriage is truly made in heaven as people all over England have known for many years. At its most basic it's a wonderful nursery pudding, served with lashings of custard. But why keep it in the nursery? Apple Charlotte made into individual desserts won't disgrace even a posh dinner party one little bit.

If one of your guests needs persuading, then just point out the pudding's "Royal Connection"! The pudding may have been named in honour of Queen Charlotte, who loved apples and supported English apple growers and it is certainly a pudding fit for a queen.

You'll want a glass or ceramic pudding basin or mould rather than a plastic one, as this pudding is baked in the oven. Individual pudding moulds also work very well and make the pudding look very delicate. 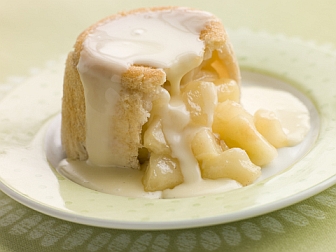 As with most recipes of this kind, it's not necessary to measure and weigh accurately. How large a pudding you make depends on the size of your pudding basin and the quantity of bread you're trying to use up.

For a 1lb / 450g pudding basin you need approximately:

Peel, core and slice the apples before stewing them with the sugar and a splash of water until soft.

While the apples are stewing, butter your pudding basin (or individual moulds). Slice the bread and remove the crusts.

Melt the butter in a shallow pan.

Dip each slice of bread into the melted butter and line the pudding basin. Press the slices well in to make sure there are no gaps. Keep back a slice for the top.

Now fill the pudding basin with the apple mixture and place the last bread slices on top, sealing the apples well in.

Bake in a medium oven until golden brown - about 30 minutes should do it.

Unmould your pudding carefully and serve it surrounded with hot vanilla custard.

For more tasty apple recipes return to the recipes page.