Is there a Patron Saint of England?

This was a question asked by an Essentially England reader. The answer ...

The patron saint of England is the dragon-slaying St George and we celebrate his feast day on April 23rd.

His emblem is a red cross on white, St George's Cross.

As patron saint of England, St George is thought to protect the kingdom, the monarch and the people and intercede on their behalf with the higher authorities.

How did St George Become Patron Saint of England?

St George was known in England long before he became the patron saint of England.

The Venerable Bede named him amongst the Christian martyrs and in the 9th century, King Alfred mentioned a church dedicated to St George in his will.

But St George, the valiant soldier, appealed most to people living through the times of the crusades. These were times of frequent wars, famines, plagues and constant uncertainty, where dragons assumed many shapes and sizes.

St George, martyr, soldier and ready to protect the innocent, must have appealed to the needs of people - since so many different countries claim him as their patron saint.

St George's Day was made a feast day for all of England in 1222. So already, he must have been well-known and very popular. But it did not stop there.

This was the age of chivalry, when knights followed codes of honour and did valiant deeds. Bravery and fairness were the ideals each man strove for. And one of the most fervent proponents of knightly ideas and ideals was King Edward III of England. He founded the Order of the Garter in 1348 and it was in his reign that St George replaced the Saxon St Edmund as patron saint of England.

The chapel at Windsor Castle, where the Order of the Garter has its home to this day, is dedicated to St George. And the Garter ceremony still takes place there every year. 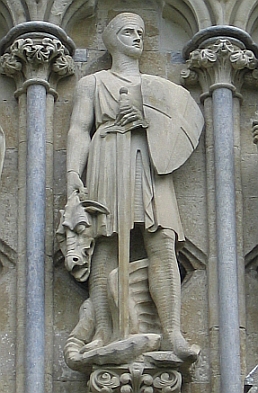 
What About the Dragon?

The story of George and the dragon is one of the wonderful tales brought back from the mysterious lands in the east by the returning Crusaders and probably one of the reasons St George eventually became the patron saint of England.

And this is one of the versions of the tale:

A dragon makes his nest by a city's only spring, depriving the inhabitants of water.

Each day, in exchange for water, the citizens bring the dragon a sheep. Soon, there are no sheep. Goats are sacrificed to the dragon, then calves, until there is no livestock left in the city.

Day and night the dragon guards the well and the city is dying of thirst.

Finally, in their desperation, the citizens decide to offer a young maiden to the dragon, hoping that this sacrifice will placate the creature and draw it away from the well for a time. But how to choose a woman to send to the dragon?

So the king calls all families to the market square, where a huge copper cauldron has been set up. All night, the citizens keep vigil around the cauldron, praying for help, until - at dawn - the king asks that each maiden place a personal token into the cauldron.

Blindfolded, the king then reaches into the cauldron and retrieves one of the tokens. When he removes his blindfold and sees what he holds in his hand, he bursts into tears.

The token belongs to his own daughter.

He begs the people for her life, but the princess is made of sterner stuff than her distraught father. She dons her best dress, says a final prayer and leaves the city. All alone, she approaches the dragon. He reaches for her with one of his claws when ... St George steps in front of the girl and faces the beast.

A mighty battle ensues, the knight's shield is broken, his armour torn and dented. And the dragons blood runs so hot, that it melts the blade of St George's sword until nothing but the hilt remains. But finally he prevails and kills the beast by impaling it on his lance.


So St George saved the day and the princess. I hope the grateful king at least gave him a new sword and armour for his troubles.

But it's quite obvious why the returning Crusaders would have had a riveted audience when they told this tale! So the story spread across Europe, and even though it was to have taken place in the east, soon St George was battling dragons in all manner of places. 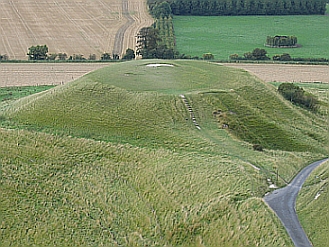 Dragon Hill, near Uffington in Oxfordshire, is the place in England most often associated with St George and the dragon.

He fearlessly fought the giant beast on this flat hilltop until he finally slew it.

And the dragon's blood was so poisonous that even after hundreds of years nothing will grow in the place where it stained the soil.

The white patch of chalk amid the lush grass is said to be the place where the dragon fell. Do you dare to stand in this spot?

Was There a Real St George?

George was a soldier in the army of Roman Emperor Diocletian. His birth date is unknown, but he is thought to have died on April 23rd, 303.

George was a Christian in a time when the religion was considered a threat. In AD 302, the Emperor Diocletian decreed that no soldier in his army should follow the Christian beliefs. Instead, all of them should offer sacrifices to the Roman gods.

George tore up the order and declared himself a Christian. He was ordered to convert, he was bribed with lands and riches, but he refused to change his beliefs.

On April 23, 303, George was tortured and eventually beheaded before the city wall of Nicomedia. He apparently died bravely and was soon venerated as a martyr.

So there we have it:

All in all, a very worthy patron saint of England!

Return to the Essentially England homepage.