There's no getting around it, the English have a sweet tooth. No, make that a very sweet tooth. And judging by the number and variety of English desserts, it's not a newly acquired taste either.

There are pudding recipes for any number of occasions. Delicate trifles, fools and jellies ideal for a summer picnic. Steamed puddings to warm your heart in the depth of a wet English winter. And flans, tarts, crumbles and pies to celebrate any fruit that gardens and hedgerows yield.

Some traditional pudding recipes have roots that reach back into the Middle Ages, when foods were rich and spicy to demonstrate the household's wealth (and to combat the lack of central heating!)

Steamed puddings or dumplings, studded with dried fruit and nuts, and spiced with lemon, cinnamon, cloves and ginger or finely minced meat - often lamb - mixed with raisins and spices and baked in a deep, thick pastry case have graced the Christmas celebrations of many a medieval court. Many of those 'early' English desserts were sweetened with honey and dried fruit, but once Columbus had discovered America and cane and maple sugars came to be more widely available, puddings quickly grew sweeter.

Custard was a favourite at the court of Elizabeth I, whose teeth bore witness to her love of sweets. Apparently they were black!

Fortunately - and despite the horrendous effects on the nation's teeth - the English love affair with the pudding continues to this day. As a German arriving in England, I found the steamed puddings the most marvellous of all. So substantial that they are almost a meal in themselves, they are served hot and often times drenched in freshly made custard or thick English cream - worlds away from the afternoon cakes and fluffy cream of my childhood.

And while I would not serve one of these after every meal, these English desserts make a scrumptious end to an autumn afternoon spent walking by the river or clearing leaves in the garden.

I love to cook, but I don't have the sweetest tooth in the world and don't bake nearly often enough. So I dithered some time before attempting my first steamed pudding. But I needn't have worried. Steamed puddings are easy to prepare. They seldom go wrong, but do require a certain amount of patience while they sit in a bath of water and simmer their way to perfection.

Check out the recipe section where you can find delights like Spotted Dick, Bread and Butter Pudding, Jam Roll or traditional English Christmas Pudding.

Another real autumn treat that I look forward to are pies and crumbles, bursting with freshly picked fruit. Pies, such as traditional English Apple Pie, can be as simple or as elaborate as your time or skills allow. But fruit crumbles, such as a tangy Plum Crumble, must be some of the easiest puddings to make. Just mix fruit with sugar, cover with any of a number of tasty crumble mixes, shove into a hot oven and extract half an hour later!

Tarts, either fruit filled and lidded with pastry, or with a softly wobbling filling of just set custard, are another delight, as is that great nursery favourite Baked Rice Pudding. 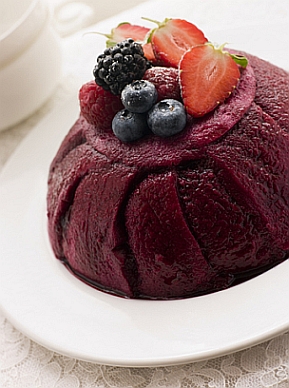 Spring and Summer are months for spending time outside, celebrating the first new fruit, and the desserts to go with the warm weather need to be gentler and more delicate. Trust the English to come up trumps here, too.

English desserts like fools, fluffy concoctions of cream and / or yoghurt and fresh fruit, make a fitting end to a light summer lunch. If you like gooseberries, there's nothing better to envelop the first ones, lightly poached, in billowing clouds of English cream. Lightly poached pink rhubarb or crushed strawberries are equally delicious. And for something the children will be ready to fight over: crumble pale, crunchy meringues into raspberry fool and call it Eton Mess. The name does as much for its popularity as the taste.

Then there are delicate berry tarts for afternoon tea, jellies, trifles and - of course - this most English of English desserts: the summer pudding! This assemblage of bread and fruit, made memorable by an extended stint in the refrigerator is - to me - a quintessential English dessert. No exotic, expensive ingredients, no elaborate kitchen skills and no art degree are needed to achieve something wonderful. Just use what's to hand - plus a little bit of English magic - and the summer afternoon will come to life.

With a summer afternoon and maybe a few friends to hand, you could do worse than check out the recipe section for delights such as Eton Mess, rhubarb fool, Raspberry Trifle or summer pudding.

Find recipes for traditional English desserts on the recipes page! 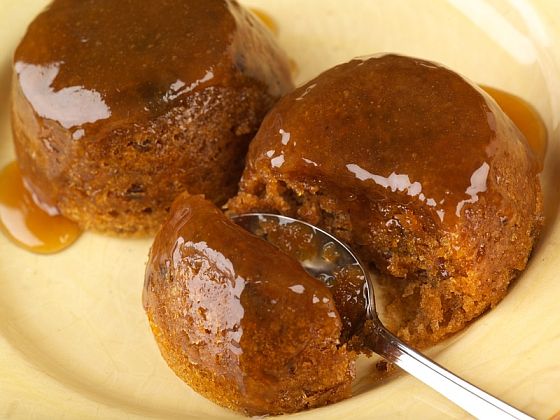 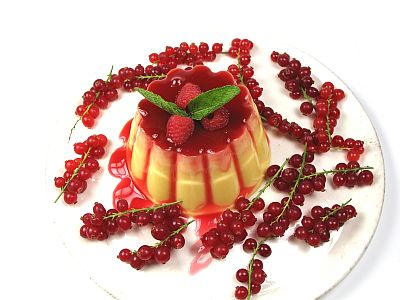