King Richard III is undoubtedly England's most maligned king. His name was most skilfully and comprehensively blackened by Tudor propagandists including both Thomas More and William Shakespeare ... and no doubt on the order of Henry VII.

Here's the man who allegedly murdered King Henry VI, his brother George of Clarence, his nephews and his wife to steal a crown. Who then tried to marry his niece to cement his rule. A cruel and vicious man, whose hunchbacked figure and other 'aberrations' were only the expression of his vile and evil character!

But was he really as bad as he's been portrayed?

Since much documentation has been destroyed and overwritten by Tudor historians and propagandists, piecing together King Richard III's life and character is not an easy task and many points are still subject of debate.

But there's also much that we know.

Richard was born on October 2nd, 1452 at Fotheringay Castle in Northamptonshire. His parents were Richard Plantagenet, Duke of York, and Cecily Neville, daughter of the Earl of Westmoreland. Richard was his parents' eleventh child and had three surviving elder brothers.

While his elder brothers Edward, Earl of March (and later King Edward IV), Edmund and George, Duke of Clarence, were tall and fair, Richard was shorter, slightly built and dark. None of the surviving contemporary records mention that he was hunch-backed or in any other way deformed.

After his father and brother Edmund had fallen in battle, Richard's loyalty was given to his eldest brother Edward, Earl of March. He aided him in his quest for the throne and was created Duke of Gloucester when Edward became king in 1461.

He accompanied Edward into exile when Richard Neville, the 'kingmaker' Earl of Warwick took up Henry VI's mantle.

After Edward's restoration Richard married Anne Neville, Warwick's daughter and widow of the Lancastrian heir to the English throne, who'd been killed at the Battle of Tewkesbury. He was made Constable and Lord High Admiral of England and was sent to 'hold the North' for his brother.

In this task he seems to have succeeded very well. He was respected as a just and even-handed judge and fair-minded administrator. He gained popularity as a skilled soldier and courageous leader of men, and someone trusted to keep the borderland secure against the Scots.

Disliking his brother's wife, Queen Elizabeth Woodville, Richard made his home in the north at Middleham Castle, and only seldom attended his brother's court. But when Edward IV died unexpectedly in 1483, leaving only a 12-year-old boy to succeed him and naming Richard as Lord High Protector of the Realm everything changed.

Unhappy with her husband's provisions, Elizabeth Woodville and her brothers intended to outmanoeuvre Richard, planning a June coronation for Edward's eldest son. But Richard was kept well informed and moved fast. He intercepted the young king on his way to London and placed him into custody in the Tower of London - apparently to await his coronation.

And there his younger brother soon joined him.

Richard was an astute politician and must have realised the danger that the influence of the Woodvilles would be to the stability of the kingdom while Edward's son was so young. He would have moved to counter that influence, replacing men loyal to the Woodvilles with his own supporters.

Nobody knows if Richard always had the intention to make himself king or if he choose this option as the only way to avert another war ... but increasingly the validity of his brother's marriage and the legitimacy of his children were being questioned.

Edward IV had been known for his promiscuity and the idea that he may have promised marriage to another woman before he married his queen did not appear too far fetched. And at that time, both the Royal princes were still seen playing or practising at arms in the Tower gardens. But gradually, they began to appear less and less frequently until the rumours began that their uncle had had them murdered.

That Richard did not immediately produce the boys as counter evidence suggests that they were indeed dead, but who was behind the deed is not so easily determined. Would Richard choose a course that would do the greatest possible harm to his chances, his reputation and the goodwill of the people he relied on? Or were others out to spoil his chances and reputation for him? The Duke of Buckingham and Henry Tudor, the future Henry VII, have both been cited as possible instigators and beneficiaries of the princes' death. And still the debate goes on.

Yet despite the rumours and counter-rumours Parliament accepted the argument and the marriage between Edward of York and Elizabeth Woodville was declared invalid on 25 June 1483. Richard's claim to the crown was recognised and on July 6th, 1483 he was crowned King Richard III.

Regarded as a 'Northerner', he was feared rather than loved in the south of England, but the people of York celebrated the new ruler with a magnificent ceremony at the York Minster, where Richard's son Edward was created Prince of Wales. Nobody who knew Richard in the North seems to have believed the rumours of murder and usurpation, but in the rest of the realm the rumours did not die down. Neither did the uprisings. First, in October 1483, the Duke of Buckingham rose against King Richard III - and lost his head when his army deserted and he was captured. Then the Woodvilles joined forces with the Lancastrian Henry Tudor who tried to invade England but turned tail and sailed back to France when he heard of Buckingham's death.

In April 1484 King Richard III's son and heir died. Richard was distraught, but at least nobody accused him of having poisoned his son ... which is what happened when his wife died of tuberculosis a year later. By then Edward IV's daughters had been received at court and rumours were spreading that King Richard III meant to marry his niece.

But the death of the young Prince of Wales left the king in a vulnerable position and in the spring of 1485 Henry Tudor was planning another invasion, while King Richard III made plans to oppose him. He relied on the Duke of Norfolk and the Earls of Huntingdon, Westmoreland and Northumberland for support when the forces met on Bosworth Field on August 22nd, 1485.

Richard fought courageously but was deserted on the field by his allies, notably Lord Stanley. He was slain trying to fight his way through to Henry Tudor. The dead king's body was stripped naked, slung over a packhorse and taken to be exhibited at Leicester. He was later buried at Greyfriar's Abbey in Leicester.

Legend tells us that after the battle, King Richard III's crown was found hanging on a thorn bush. 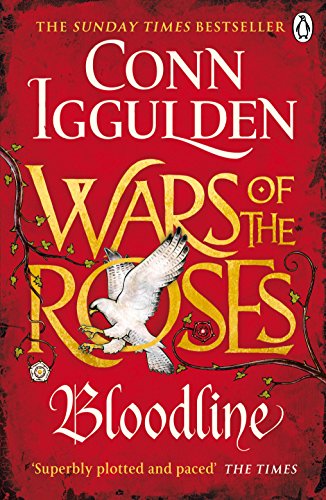 The brilliant retelling of the Wars of the Roses continues with Bloodline, the gripping third novel in the new series from historical fiction master Conn Iggulden.

Amazon UK
amazon.com
Sharon Penman's The Sunne in Splendour is an enticing picture of life during the Wars of the Roses. It's romanticised, but it is well researched and a very enjoyable read.


For information on other kings of England, return from King Richard III to the English Monarchs page