During the over 400 years the Romans spent in Britain, they built roads, towns, forts, walls, baths, and villas. They produced food, manufactured goods, enjoyed art and crafts, and protected their homes. We know of many Roman sites, and each newly discovered one adds to our knowledge of life in Roman Britain.

North Leigh Roman Villa in Oxfordshire is one of the larger courtyard villas to be found in England. It nestles in the crook of the river Evenlode in a lovely green valley some 12 miles north-west of Oxford. It's an idyllic spot for a home, but the Romans weren’t the first to find this site appealing. Iron Age pottery and archaeological features have been found under the Roman buildings.

The villa site is tucked away amongst narrow, rural roads, so when visiting North Leigh Roman Villa it’s probably best to use your SatNav with the post code OX29 6PZ. Once you get close to the site, look out for the brown Roman Villa signs, which will help guide you to the small parking lay-by. From the parking area, a signposted rough track leads down to the site, which in wet weather could be slippery and muddy. 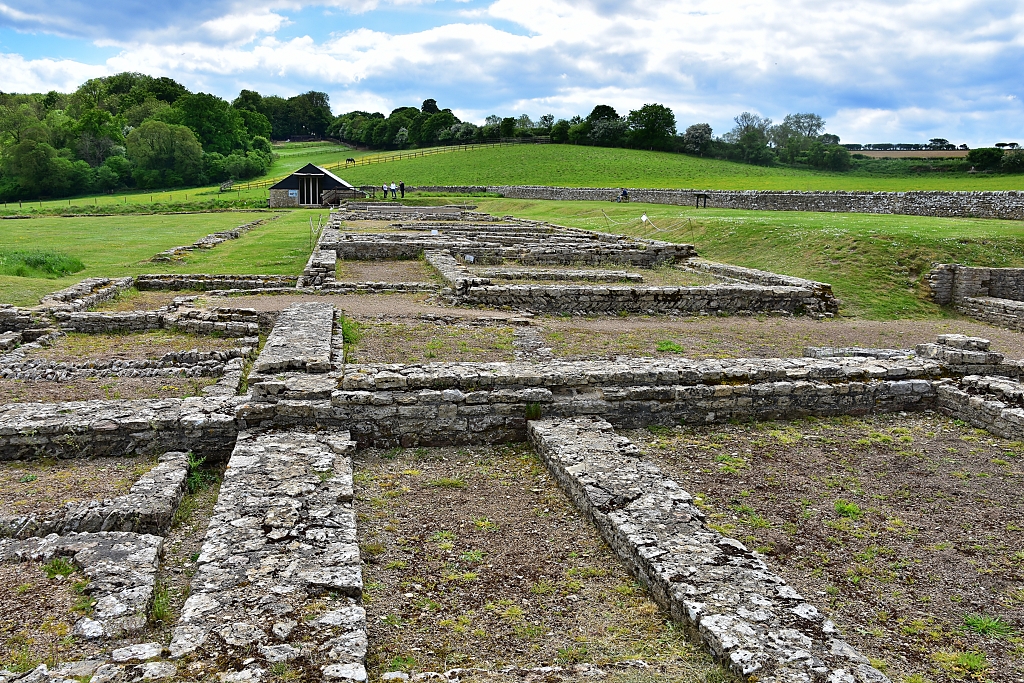 I’m sure I mention it every time I write about a Roman site, but I do love a good bit of Roman history. North Leigh Roman Villa has been on my visit list for years, and considering we only lived 20 miles away for 16 years, it's surprising that it took another 11 years before we made the trip. I used to use the area regularly for my cycle training, often seeing the brown signs. I've even stopped to visit the site, but didn’t fancy cycling or walking down the rough track.

After being first settled in the Iron Age, the first villa was built here at the end of the 1st / beginning of the 2nd century AD. It formed the heart of an agricultural estate and might have belonged to a wealthy British family who embraced the Roman way of life.

The earliest villa occupied the north-west part of the current excavation, and provided living accommodation and a bath house. Over time, North Leigh Roman Villa was rebuilt and expanded, reaching its most extensive period in the 4th century AD. At that point, the villa had 60 rooms, three bath houses, sixteen rooms with mosaic floors, and eleven rooms with underfloor hypocaust heating.

A wealthy, busy place with servants and slaves working the surrounding fields and in the villa itself. 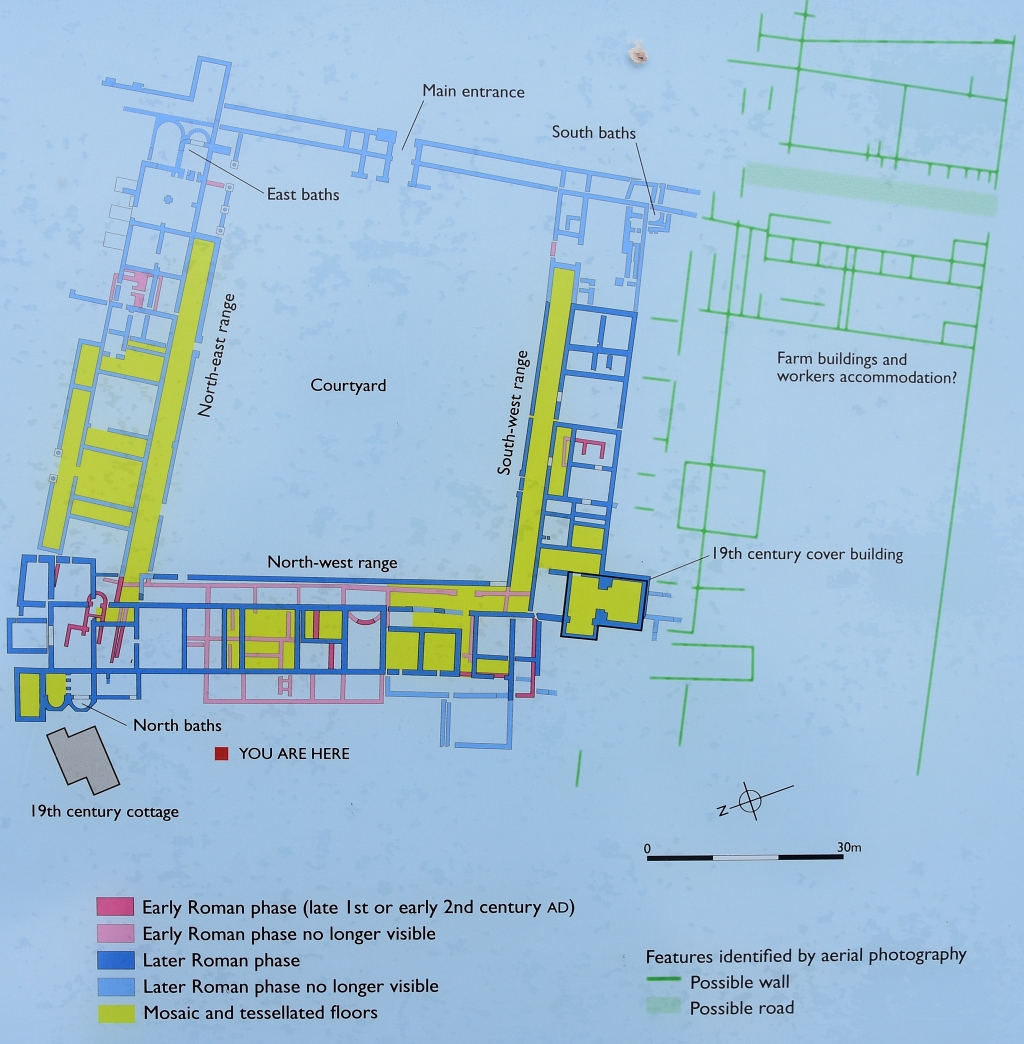 The existence of three separate baths suggests that the family living here was extensive and had their main living quarters in the north-west range, which is the oldest, and most modified part of the site.

As we walked around the north-west range, we noticed a strange half-curve wall within one of the rooms and wondered what it was. It was only when we compared what we saw in front of us with a map that we realised we were looking at evidence of Roman home improvement! They "grew" the villa along with their family, and we had spotted the signs of their expansion works. It really felt like we were one of the archaeologists from “Time Team”! 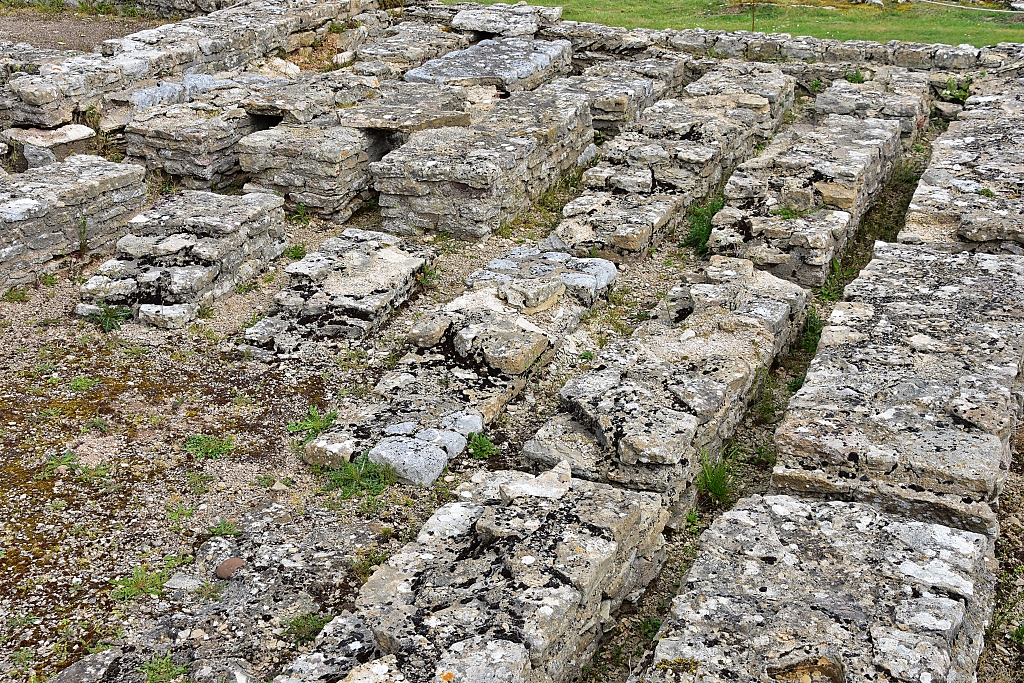 North Leigh Roman Villa was first discovered in the 19th century and has been the subject of excavations several times since. Besides masonry, bath houses, underfloor heating, and mosaics, excavators also found a stash of bronze bars, pellets, and counterfeit coins in the furnace area of the North Baths. I wonder who was forging coins!

It's clear from the excavations that the villa had been occupied for over three hundred years. It’s amazing that we can walk around this Roman family home and start to understand what life was like almost 2000 years ago. If you can't quite picture it, there's also an artist's impression of how North Leigh Roman Villa might have looked in its heyday in the fourth century. 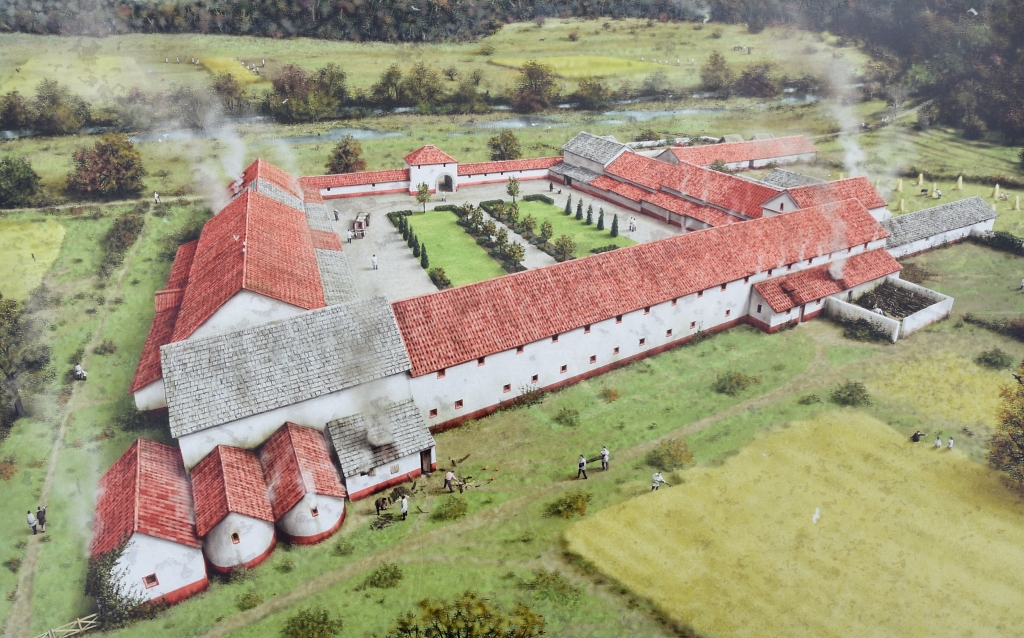 A large part of the south-west range excavation is still visible. From the plan, it looks like there would have been a long hall with a mosaic floor. Unfortunately for us, all that has survived to today is the layout of the rooms. The south bath suite would have been at the end of this range, but is now hidden under a grass bank. 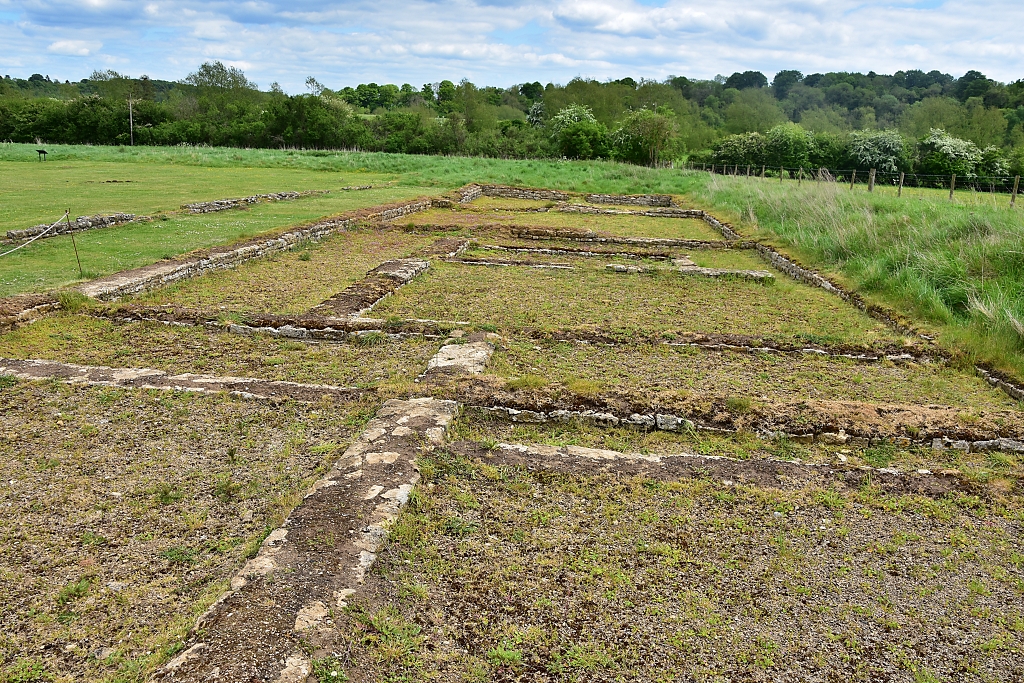 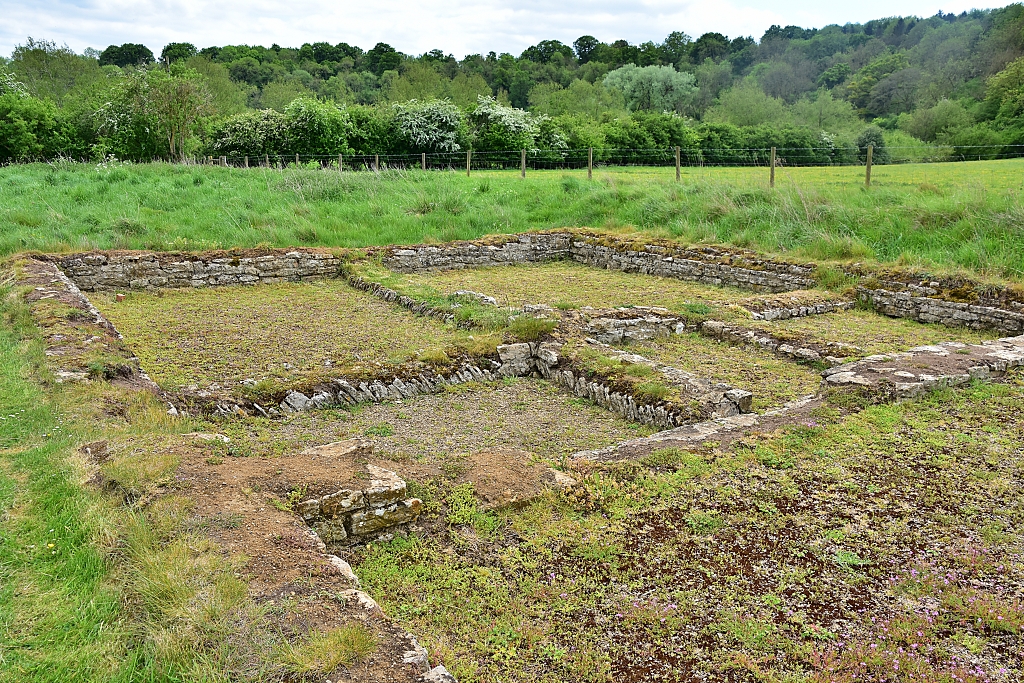 The End Rooms of the South-west Range
© essentially-england.com

Many of the more fragile sections of the villa have been reburied to protect them for later study. A few have been lifted and preserved, amongst them the floor of the villa's 3rd century dining room, which has been moved into an old farm building to protect it from damage and souvenir hunters.

For the most part, the building is locked, but does have large windows through which you can see the floor. During our visit, we were lucky to find the caretakers present and so and got to see the floor in its full glory!

For details on when the building is unlocked, and to learn more about Roman Britain, visit the English Heritage website here. 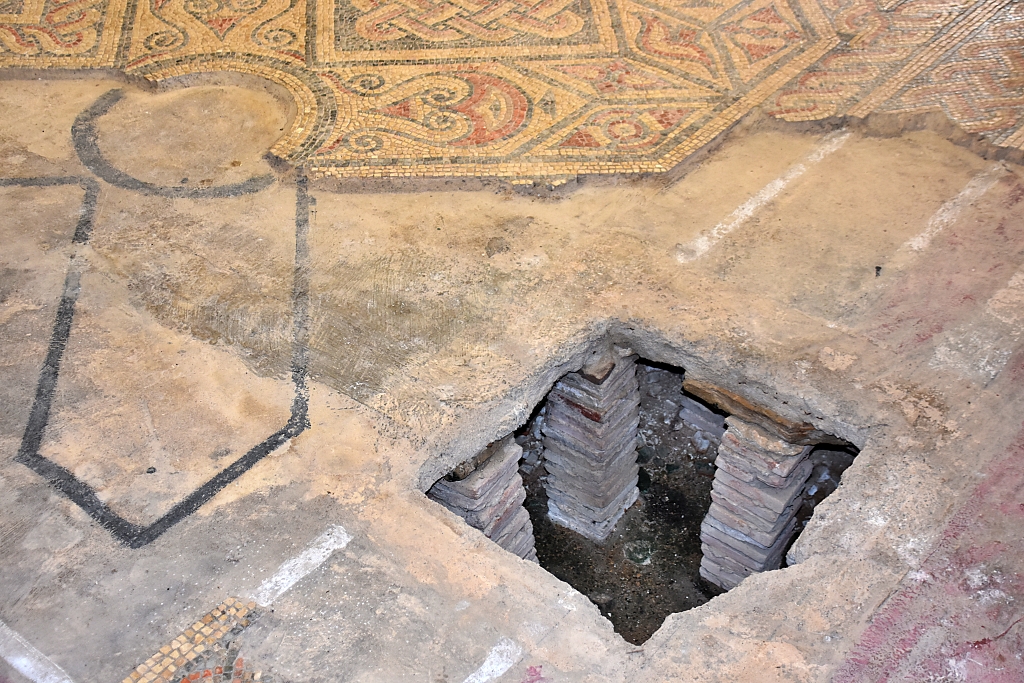 Mosaic floors were expensive. Not only did they require special materials and an artistic touch, laying the tesserae was laborious, time-consuming and a skilled job. A mosaic floor would have given a luxurious feeling to the room, and families used them to show off their wealth.

The North Leigh mosaic is laid over an underfloor hypocaust heating system, which also has flue tiles to heat the walls. The floor's intricate pattern is made up from knots, interwoven borders, and shapes. It is not related to stories or mythology.

Can you imagine a Roman family enjoy dinner in this room 1700 years ago? The Romans loved colour. Apart from the colourful mosaic floor, the plaster walls would have been painted, and the tables and couches would have been far from plain. The family and important guests would lounge on the couches at one end of the room, while those of less importance sat at the tables further down the room. On cooler days the floors and walls would be warm from the fires heating the hypocaust system and servants would be offering fine food and wine.

It all sounds so decadent!

So why did it stop?

This is what I keep on asking, and I'm possibly, slowly starting to understand.

The Romans began to withdraw from England around the year 410. Without them here, their administration infrastructure broke down. Taxes weren't collected. The peace wasn't kept. And the Britains learned to make do without costly imports from overseas.

The Romans left a power vacuum, too, leaving England ripe for invasion, and Saxon people from Germany duly arrived. The Saxons were not townsfolk, but farmers, unused to luxuries. And so the large Roman towns fell into decline. The grand villas, with their expensive, labour-intensive heating systems, fell out of fashion and were abandoned. People started to move back into farmsteads and simple homes with a fire at the centre.

This may be what happened to the family living in the villa at North Leigh.

The Oxfordshire landscape consists of gently rolling green hills and farmland which becomes hillier towards the Chilterns. There is a maze of small roads and footpaths, making it an excellent destination for walking and cycling holidays or short breaks.

For the less energetic, Oxfordshire brims with history and wonderful places to visit: the university city of Oxford and its history and grand buildings, Woodstock and Blenheim Palace, small Cotswold towns, and the River Thames.

If you're a Downton Abbey fan, then you might like to know that many of the scenes were filmed in Oxfordshire. The charming town of Bampton was used as the Downton Abbey village.

Why not visit and spend a few days wandering between spires, Roman mosaics, ancient standing stones, and green, rolling hills? Here are a few ideas of where you could stay: 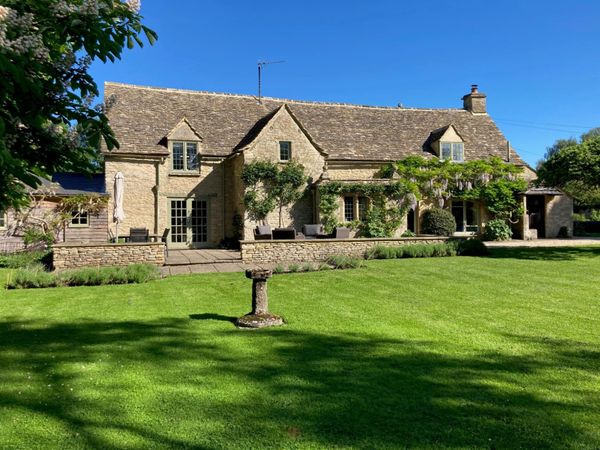 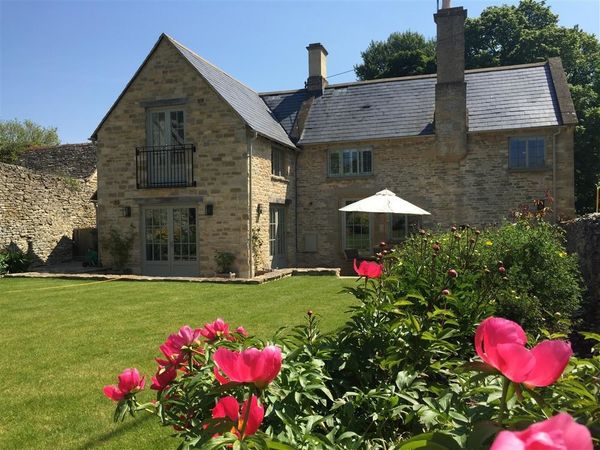 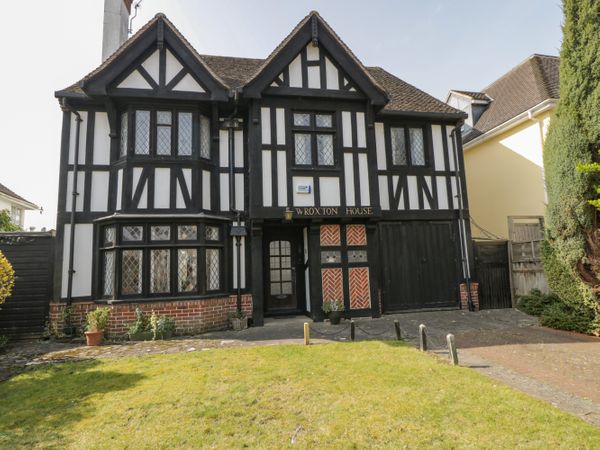 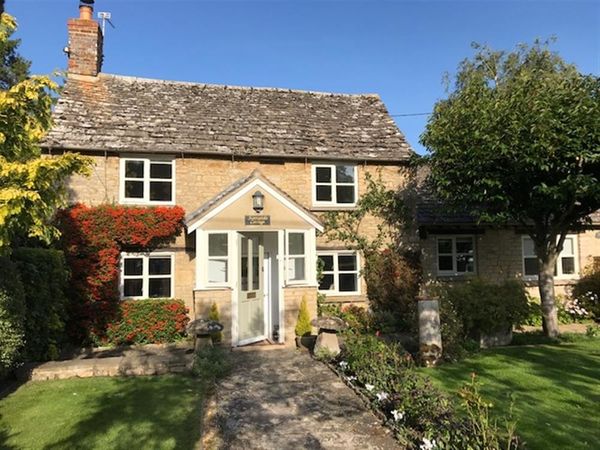 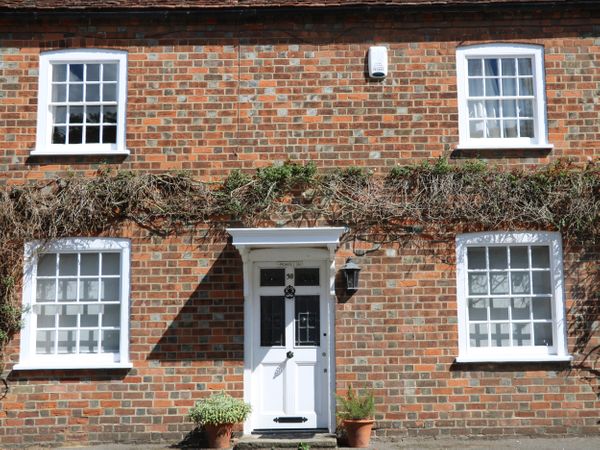 To browse holiday cottages in other parts of England click here.

If you have enjoyed reading about North Leigh Roman Villa and would like to explore other areas of England, then please return to our home page. 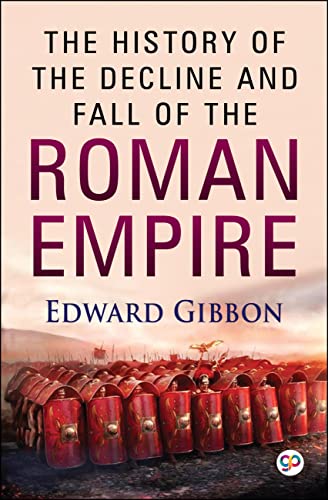 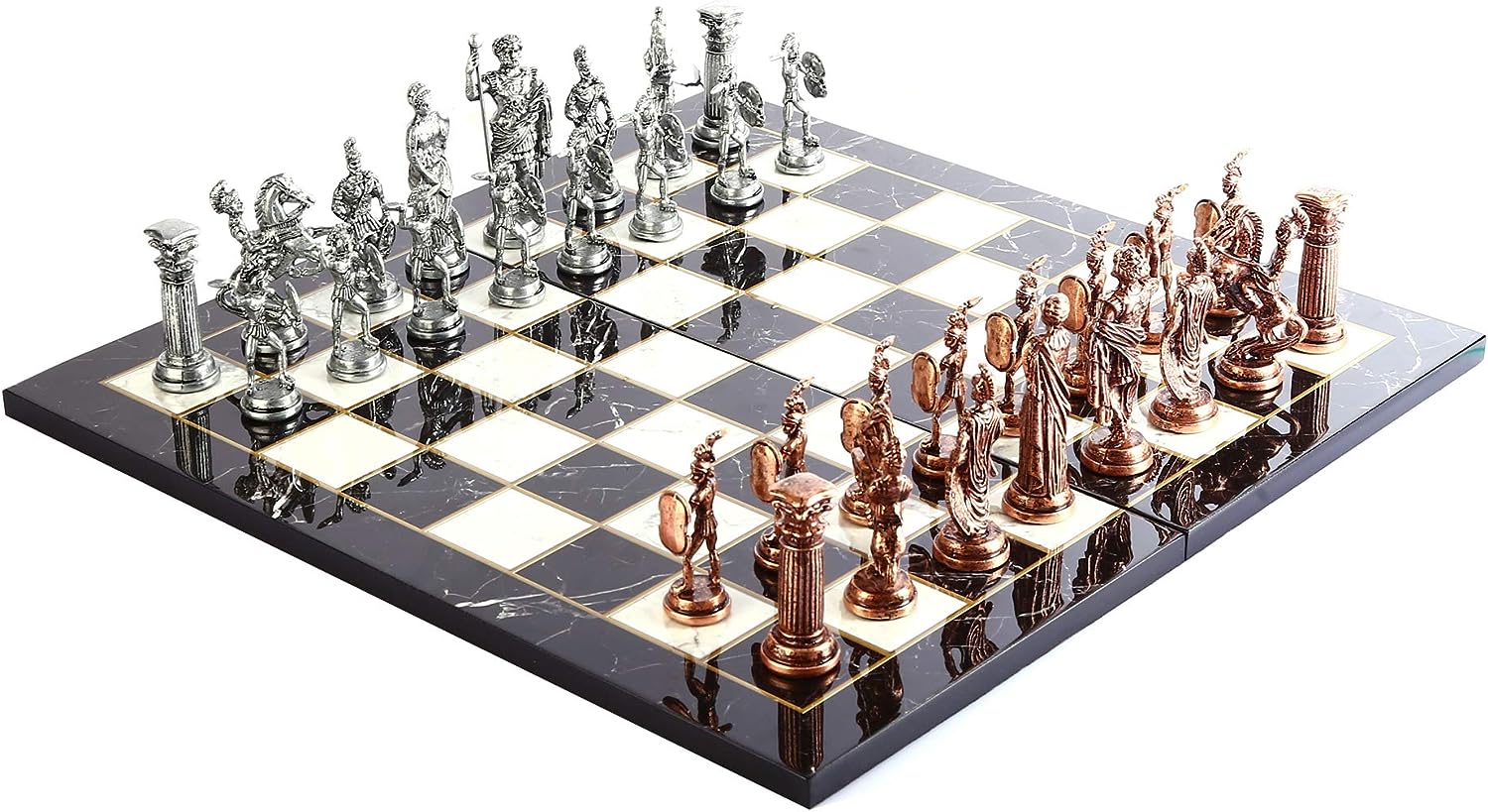 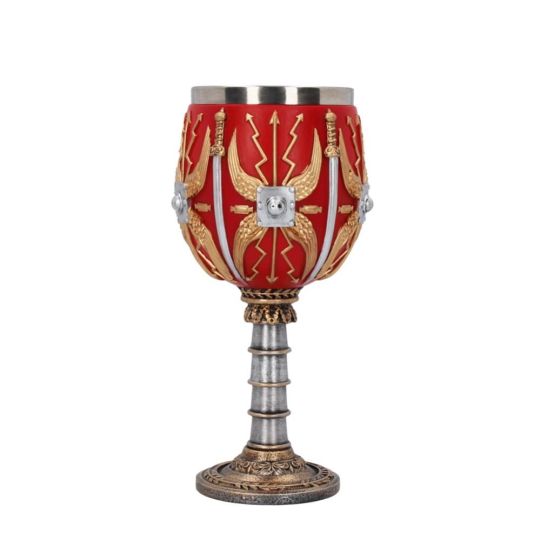 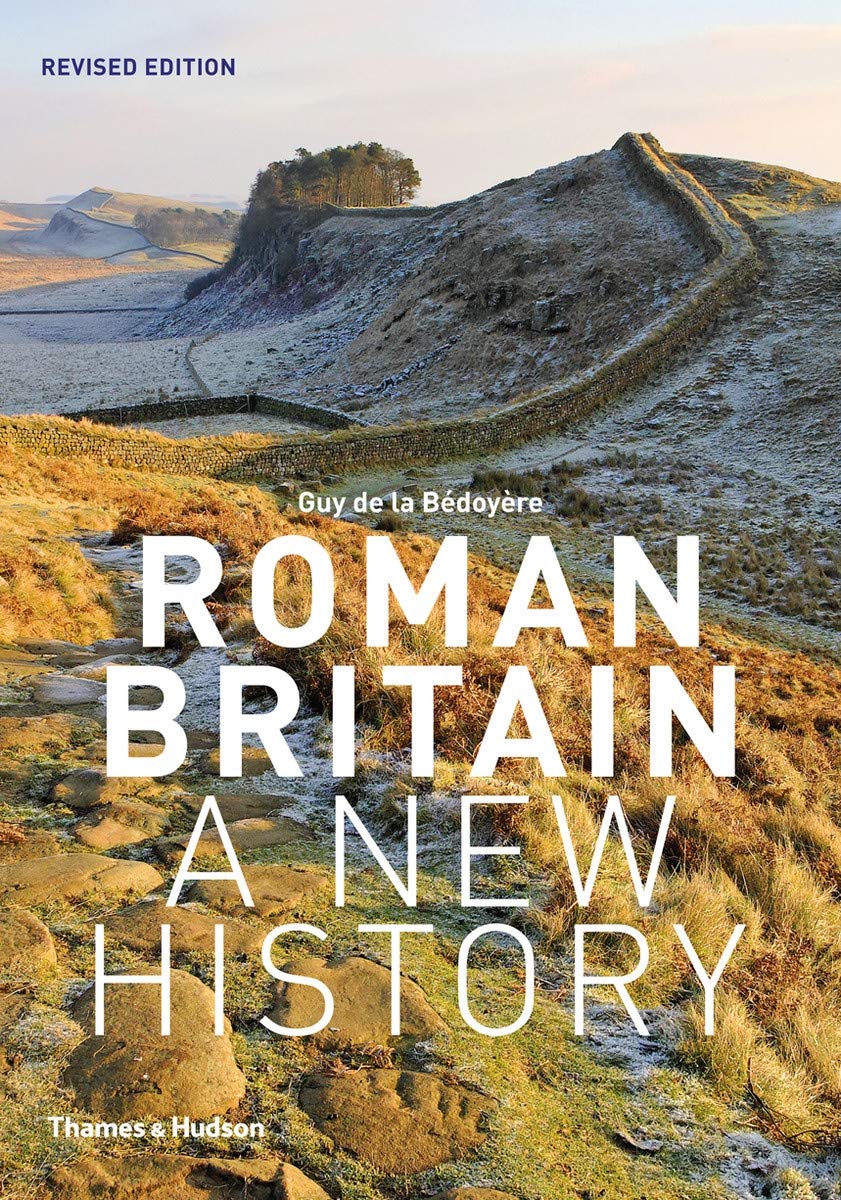