Kings and Queens of England
The Shortest-Reigning English Monarchs

The year 2017 will be remembered as the time we marked the 65th anniversary of the accession of Queen Elizabeth to the throne of England.

For lovers of English history the Diamond Jubilee provides a good opportunity to remember the reigns of other long-serving English monarchs; Queen Victoria, who reigned for 63 years and 216 days, being the obvious example.

However, do spare a thought for the English Kings and Queens who, for a variety of reasons, had shorter reigns. And bear in mind that the length of reign is no indicator of how just and effective one of those English monarchs actually was.

Here is a list of five of the shortest-reigning English monarchs. Please note that Lady Jane Grey has been left off the list as she was proclaimed but never crowned; I hope this omission isn't as hotly-disputed as Jane's reign was!

King Harthacnut was the last Danish king to rule England. The son of King Canute, his reign as English king might have been short but it is worth noting that he was King of Denmark in the five years prior to him becoming King of England.

Harthacnut's name translated as 'Tough Knot' in Danish but his reign as ruler of four European territories - he also briefly ruled Norway - soon unravelled as he struggled to hold on to his father's possession.

He was, by all accounts, not a popular King. The English were used to be being ruled by council and did not take to the Danish King's autocratic style or harsh taxation system.

Harthacnut died at a wedding in Lambeth - one which was not his own; he was unmarried and had no children. His final words came as he raised a drink to toast the health of the bride.

When we picture Richard it is hard not to imagine a middle-aged man. Basil Rathbone, Ian McKellen, Al Pacino and Vincent Price were all in their 40s or 50s when they played Richard on stage or on the screen. Perhaps the most famous portrayal of Richard comes from Laurence Olivier who was 47 when he decided to portray Richard as a hunchback in a 1955 film adaptation of Shakespeare's Richard III play.

Richard's short reign is full of myth and rumour; we don't know the exact nature of his involvement in the disappearance of the two young princes in the tower and the idea that Richard was a hunchback seems to be Tudor propaganda.

But we do know that Richard died bravely in the Battle of Bosworth Field, refusing to flee after several of his key lieutenants defected to the side of Henry Tudor.

Modern historians are starting to see Richard in a far kinder light than the historians of the late 15th century did.

"I have found it impossible to carry the heavy burden of responsibility and to discharge my duties as king as I would wish to do without the help and support of the woman I love."

So goes the most famous resignation speech in English history; one which was made by Edward VIII as he decided to abdicate so that he could have the freedom to marry American divorcee Wallis Simpson.

Edward's abdication changed the course of English history - had he remained King, married another lady and had children then Elizabeth would never have become Queen and 2012 wouldn't be a Diamond Jubilee year. 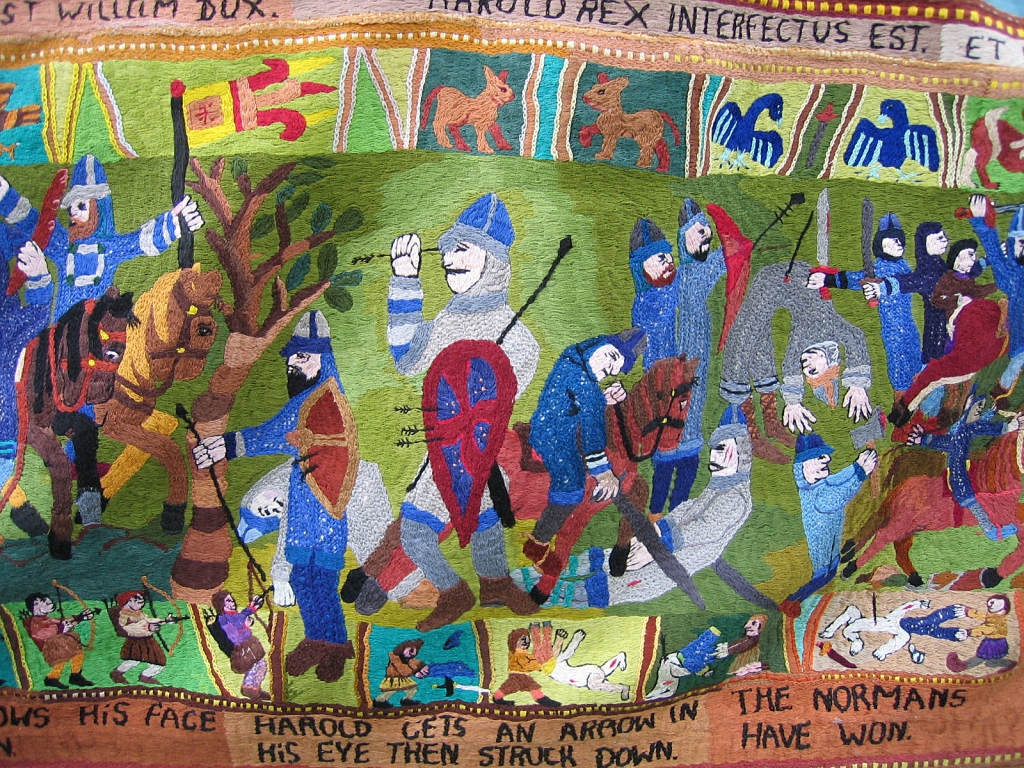 Only two English monarchs have died in battle on British soil. Richard III died during the Battle of Bosworth Field and Harold, the last Anglo-Saxon King, died at the Battle of Hastings.

The popular perception is that Harold was killed when an arrow struck his eye. This perception is given credence by an image on the Bayeux Tapestry which depicts a figure gripping an arrow near to a Latin caption stating 'Harold the King is killed'.

However, some historians have pointed out that it is unclear which figure on the tapestry the caption refers to; it could equally apply to a neighbouring image of a knight being trampled under a horse.

It's always been a good idea to take care where you put a caption!

Also known as Edmund Ironside, this king led a spirited defence of the English kingdom when the Danes, under Cnut the Great, invaded.

Edmund was finally defeated at the Battle of Assandun - a battle which is thought to have taken place at Ashingdon Hill in south-east Essex.

Edmund agreed to divide up the country after Cnut's victory; retaining Wessex and letting Cnut take the rest of England. Edmund died just over a month after becoming King of Wessex and Cnut became King of all England.

Cnut is more famously known as Canute, the wise king who, according to legend sat on his throne while waves lapped at his feet. This great Dane reigned for 19 years - a considerably longer reign than the man he replaced and who is still the shortest-reigning of all English monarchs.

Essentially England would like to thank James Christie for this enjoyable look into the lives of the less fortunate English monarchs. James Christie writes for UK business directory Thomson Local.