King Stephen of England was the last of the Norman kings of England and his memory is forever tied to the long and vicious war he fought with his cousin, the Empress Matilda for England's crown.

King Stephen's exact birth date is not known, but it is thought that he was born around 1097 in Blois in France.

His father died on crusade when Stephen was a child and his mother sent him to the court of his uncle, King Henry I of England, to receive the education fitting to a Norman noble.

Stephen was a favourite with his uncle. The king granted him lands in England and Normandy and Stephen had a seat on his council. He also married well, and his wife Matilda brought him Boulogne and large estates in Kent. 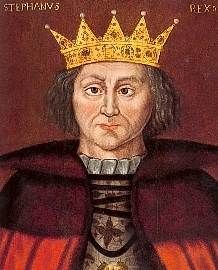 He appears to have been content with his life, but after William, the king's only legitimate son drowned in the sinking of the White Ship, many barons of the realm looked to Stephen, the man closest to the throne. King Henry I, however, did not. Instead he willed the crown of England to his daughter, Matilda.

In a world where women were regarded as inferior because they could not defend their rights and possessions on the battlefield, Henry I's decision to declare his daughter Matilda as his successor horrified his barons.

For not only was Matilda a woman who wanted to rule England, she was also married to count Geoffrey of Anjou, whose ambitions in Normandy were a thorn in the side of every landed Anglo-Norman baron.

When King Henry died Matilda was in Anjou raising a young family, unable to travel to England to take up her new position.

Many of the barons promptly reneged on the oath they had sworn to the old king and turned to Henry's nephew. Stephen let himself be persuaded and within three weeks of the old king's death, the count of Blois became King Stephen of England.

Stephen was intelligent, well liked and respected, and an excellent soldier and battle commander. But his decision to take the crown caused nothing but heartbreak. For Stephen was not an effective king. Slow to anger and quick to forgive, he was a very different man than his ruthless uncle had been.

When Matilda landed at Arundel, intent to wrest the crown from him by force, the gallant Stephen could not bring himself to imprison her. Instead, he provided an escort and sent her on her way. With the help of her half-brother Robert of Gloucester, Matilda set up a rival court in the west country and began her bid for England's crown.

At first, Stephen had the upper hand in the war, but when he was captured at the battle of Lincoln in February 1141, it was soon seen that Matilda had none of his qualms. She transferred him to Bristol castle, one of the strongest castles in England at the time, and held him for nine months, some of the time in chains.

Meanwhile, Matilda moved to London and began her rule. But - fortunately for Stephen - she neither had his generosity nor his charm. Before she could be crowned, her unreasonable demands so upset the Londoners that they declared their support for King Stephen, threw in their lots with his wife and her army, and drove Matilda from the city.

Stephen is Freed and Crowned Again

Stephen's wife continued the fight and when her troops managed to capture Matilda's half-brother, Robert of Gloucester, the king could finally be freed, exchanged for Matilda's most steadfast ally.

Stephen had himself crowned for a second time, this time in Canterbury Cathedral, but even this reaffirmation of his claim did not end the war. Neither did it end when Stephen's army trapped Matilda in Oxford castle. After a siege lasting three months Stephen was preparing the final assault, when Matilda managed to escape.

History tells us that she had herself lowered from the battlements onto the frozen moat at night during a snowstorm and walked through the lines of Stephen's army unrecognised and unmolested. King Stephen, a gallant soldier, could only marvel at her bravery.

It was not until 1147, when Robert of Gloucester died, that Matilda gave up her quest for the English crown and returned to Normandy, which her husband had taken three years earlier.

Instead, she conferred her claim onto her eldest son Henry. Since Henry was only 14 years old at the time, Stephen's crown seemed safe a little longer. But in yet another twist of fate, Stephen's son Eustace suddenly died in 1153, leaving the king without an heir. Tired and disenchanted, Stephen finally agreed to nominate Matilda's son Henry as his heir, ending the long-running dispute.

King Stephen died shortly after, in October 1154 at Dover. He was buried at the abbey he founded with his wife, Faversham.

In her novel When Christ and His Saints Slept Sharon Penman paints a vivid picture of that time in England's history when it was said by the people that God had forgotten England.  The struggle between King Stephen and Empress Matilda for the English crown was long and costly and almost brought England to her knees.


Return from your exploration of the life of King Stephen to the English monarchs page for more about England's fascinating rulers.