Rothbury
The Capital of Croquetdale

Rothbury is a small, scenic market town nestled in the glorious Coquet Valley in beautiful Northumberland countryside. With the picturesque River Coquet passing through the town and a good selection of bustling independent shops and pubs, it makes an ideal place for lunch and an afternoon stroll. It's equally suitable as a base from which to start your adventures in the Northumberland National Park and/or explore the stunning Northumberland coastline, which is an Area of Outstanding Natural Beauty.

We’ve been lucky enough to have had that quick visit and relaxing meander around town. We've spent a week on holiday during which we explored Northumberland, on foot, by bike, and by car. And we've also camped just a little further along the river near Alwinton. And time and again, we keep coming back into Rothbury! 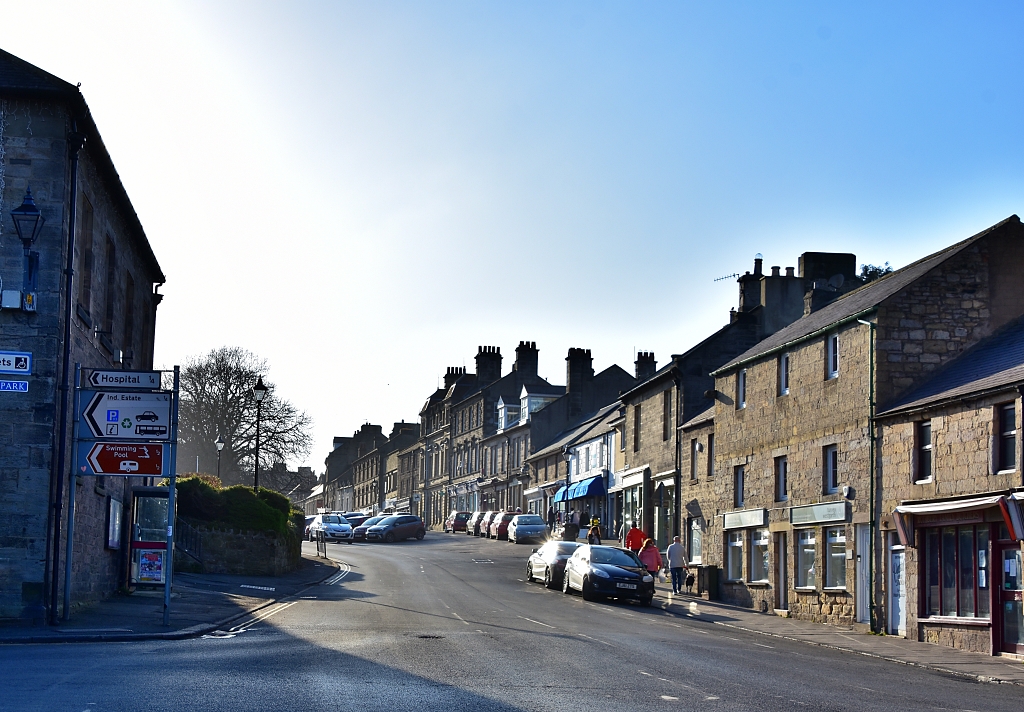 We stayed in a very quiet and cosy holiday cottage in Whitton, just up the road from Rothbury. When I say up it was up, which was okay after a beer or possibly two in town, but if carrying a shopping there was a little huffing and puffing involved in getting back home. The same could also be said for the end of our tandem bike rides!

A Short Stroll Around Rothbury

I wouldn’t necessarily call Rothbury a historic town, but it does have some lovely buildings dating from the eighteenth century, and over the years it has had several Royal visitors. I found this lovely Chronology of Rothbury that lists events from 12000 BC to 2015. And I’ve created, and mapped, a relaxing “Rothbury Stroll” which visits the main points of interest. If you feel brave and want to venture further, then you could climb up to Whitton and look at Sharp’s Folly. There is also a pele tower in Whitton, but this is on private property.

Our 1.3-mile stroll around Rothbury is the perfect end to a lovely lunch. We start from the main car park in an area called The Haugh. The name comes from the old English word “halh”, meaning a flat riverside meadow. On this, southern, side of the river there was also a steeplechase horse racing course which held races for 200 years. The last race was in 1965, since which the land has been converted to a golf course. 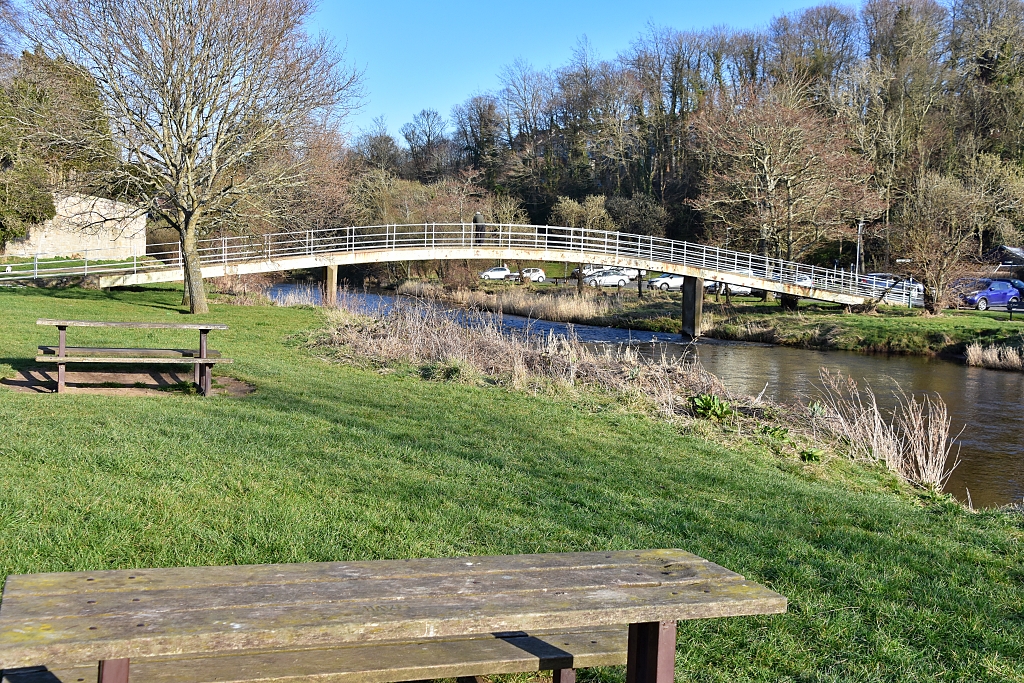 View From The Picnic Area Over The River Croquet to Haugh Car Park © essentially-england.com

If you’re like me, you'll see the river and would be itching to get to the bridge over the River Coquet. So, let’s go that way and take in the beautiful views around us. I’m not sure what it is, but there is something very relaxing about standing above a river and watching it flow. Here we get the relaxation and great views as well. The hills overlooking the car park are the Simonside Hills, and they offer great walking. There is a nice poem in the Newcastle House Hotel:

"Oh purple hills of Simonside. Ye olde times sailors guide.
Where the grouse and partridge o'er thy heather guide.
Oft have I seen the blue North Sea from off thy highest hill.
While tiny streams run down thy sides towards old Tosson Mill."

After crossing the footbridge, we continue along the northern bank of the river to a fifteenth century bridge. This bridge has been widened and modified over the years and once was a toll bridge on the “corn road” that went to Alnmouth port. Make sure you cross the bridge to see both sides. Apparently, there is a difficult-to-spot pill box from WW2. We missed it! 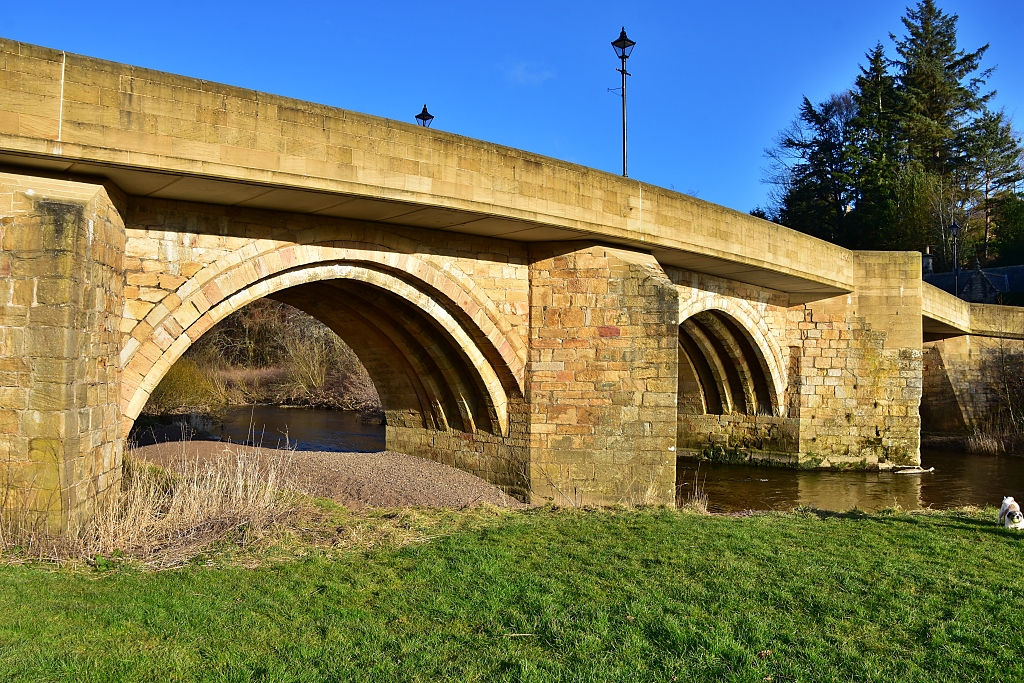 The Bridge Over The River Croquet in Rothbury © essentially-england.com

We head back into town, past an old boy’s school on the corner at the junction with Haw Hill and to a main T-junction. On our left is The Jubilee Hall, which has a chequered history and is now used as a cinema and meeting place. Turn right and continue along this road to the Armstrong Cottages. There are some fine old buildings along the way, including The Queen's Head and The Garage. Take care, though, as the pavement swaps from one side of the road to the other. 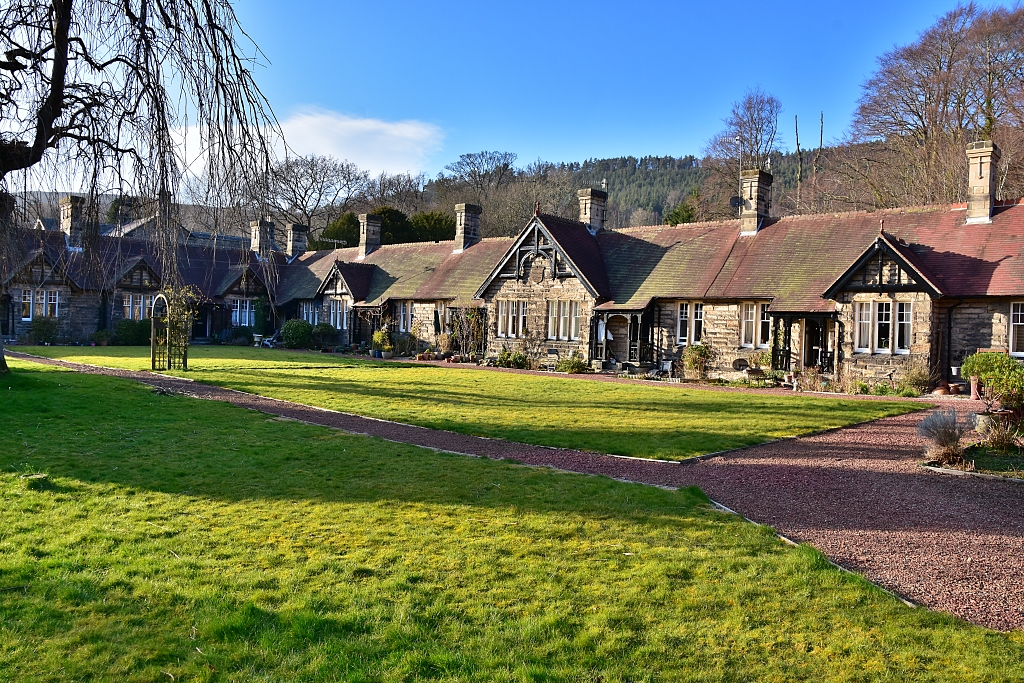 The Armstrong Cottages are a collection of 12 attractive almshouses built in 1896 by William Armstrong of Cragside to house retired estate workers. These cottages were built to replace the old almshouses demolished when the United Reform Church was constructed.

We’re going to retrace our steps, back into the heart of Rothbury, keeping to the right-hand side of the High Street. This gives you an opportunity to pop in and out of the shops. As you walk further west through the town, you’ll also notice the nice views over to the Simonside Hill. 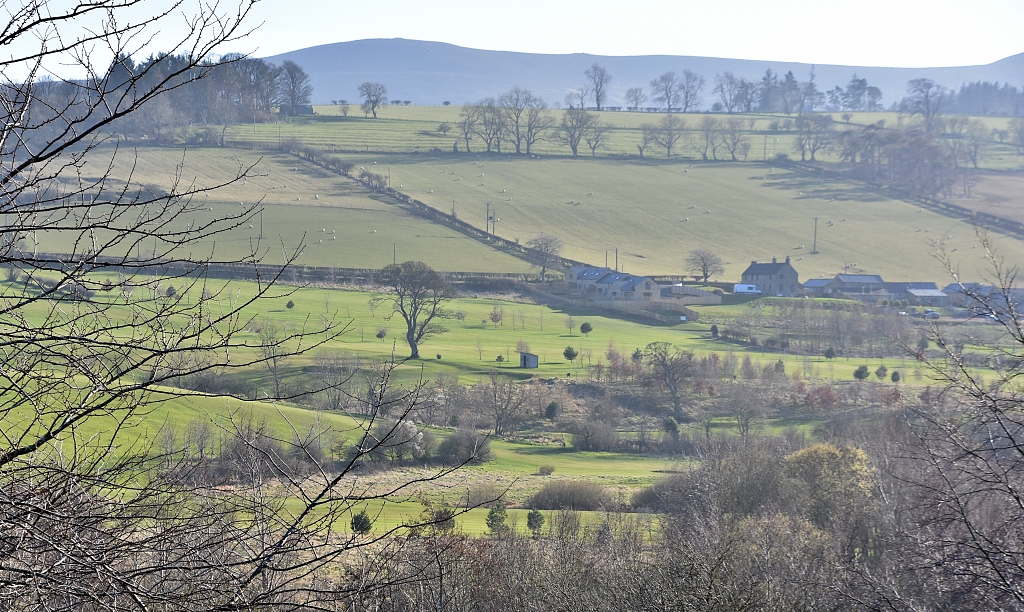 Stay on the right-hand side all the way to the junction of Gravelly Bank. You should now find yourself opposite the grand Rothbury House. Built in 1789 and originally a hotel, it is now a convalescent home run by the Royal Air Force Association. 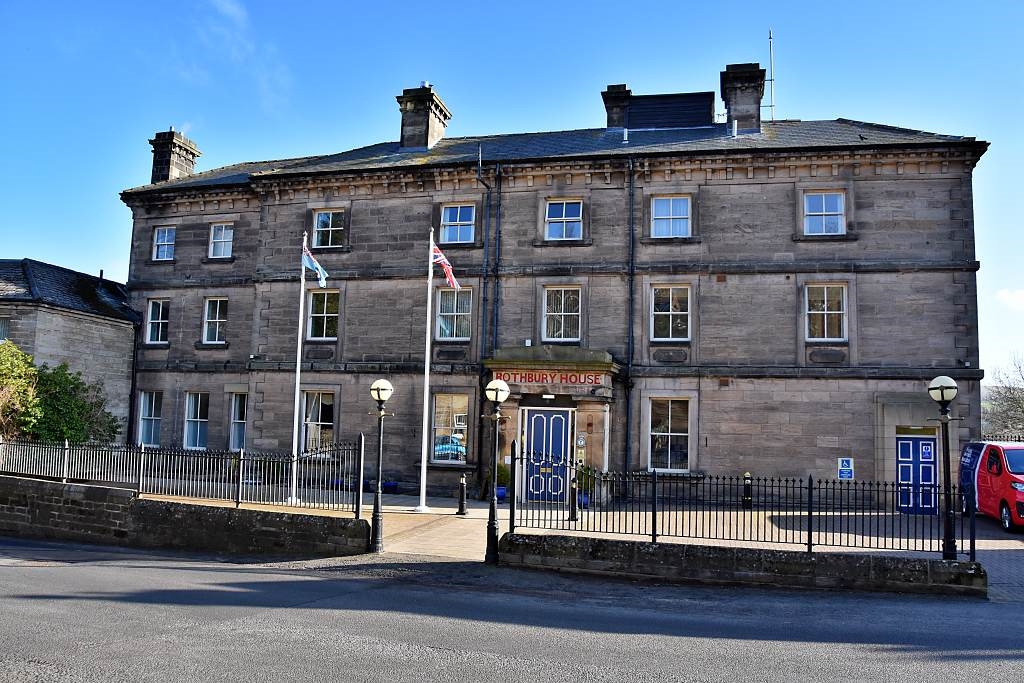 Keep to the right-hand side of the road and walk back towards the centre of Rothbury. The first building we pass after leaving Rothbury House is the old Coquetdale Cottage Hospital, which dates to 1872. It’s now been split into apartments and a new hospital has been built along the road up to Whitton.

On the right is the United Reformed Church, which was opened for services in 1896. Just outside the church is Donkin’s Lamp. This elaborate street light was given to the people of Rothbury in 1902 by Robert Donkin to commemorate the coronation of King Edward VII and Queen Alexandra. The lamp was originally a gas lamp and stood outside Church House. It has been fully restored, converted to electricity, and relocated to its current position. During its restoration, it was noted that the date of the coronation was on a plate, which when removed had another date below it. It turns out that King Edward VII had appendicitis a few days before the original coronation date of 26th of June 1902 and had to rearrange the date of his coronation to the 9th of August. 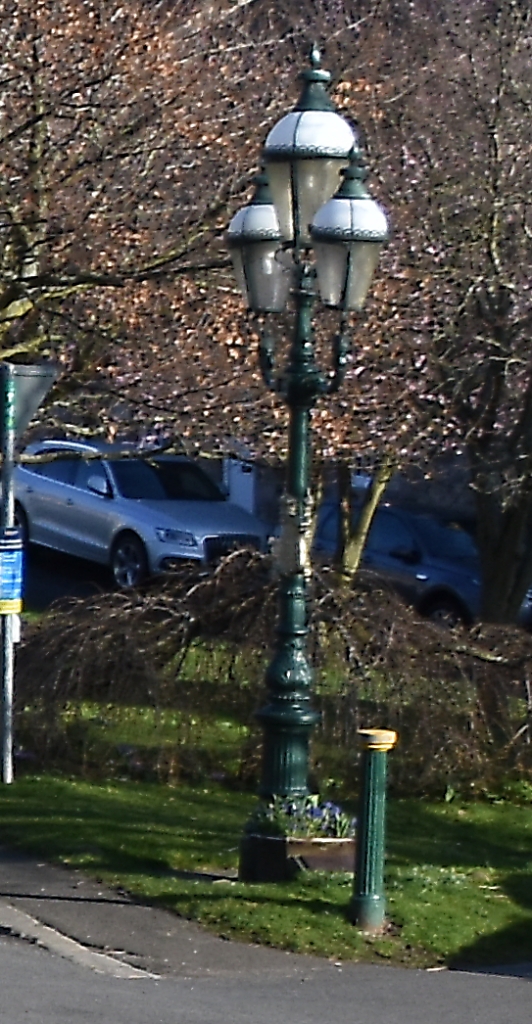 The Market Cross in Rothbury
© essentially-england.com

In the centre of the green is the Market Cross, a beautifully carved piece of Cragside rock. To the annoyance of the townsfolk, this cross was erected in August 1902 in memory of Lord and Lady Armstrong, and replaced a square, open, roofed building from 1722. The old building was in a poor state but did offer some cover to market goers!

Markets have been held in Rothbury since 1291, when King Edward I granted a charter for a weekly market to be held on Thursdays and an annual fair to be held for 3 days starting on St. Matthew’ Day, 21st of September. Sadly, there is no longer a Rothbury weekly market, but there is a monthly craft fair held on the first Saturday of each month between April and September in The Jubilee Hall. 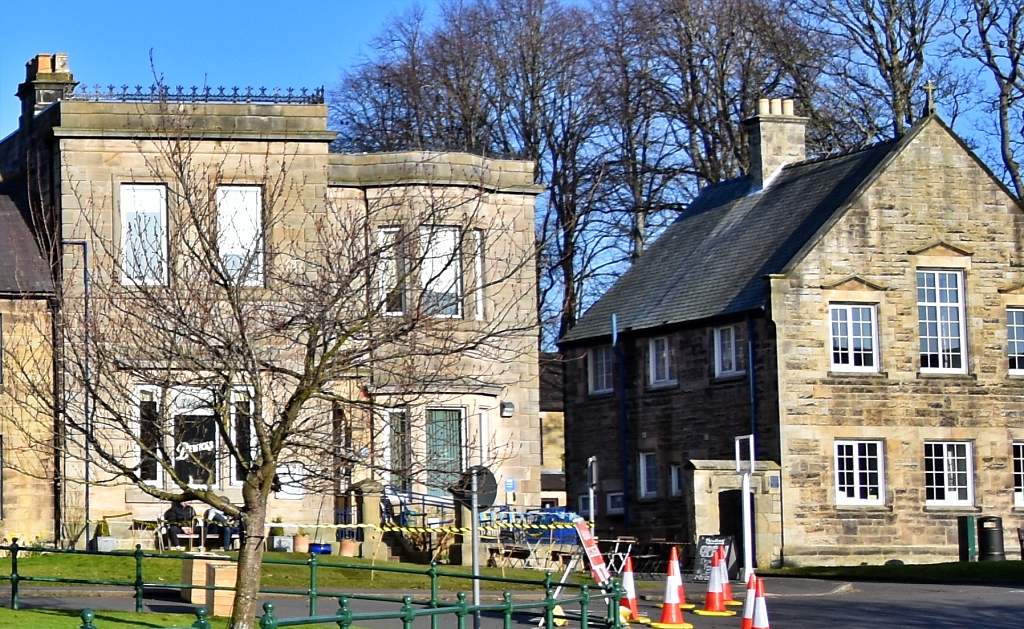 Follow the road around to your right and walk towards the church. A couple of buildings to mention on your left are Church House and the Parish Hall, built around 1900.

Parts of All Saints Parish Church date to the early thirteenth century. It’s a lovely building and well worth a look inside. It is believed that there has been a church or monastic building on this site since the Anglo-Saxon period (410 - 1066). 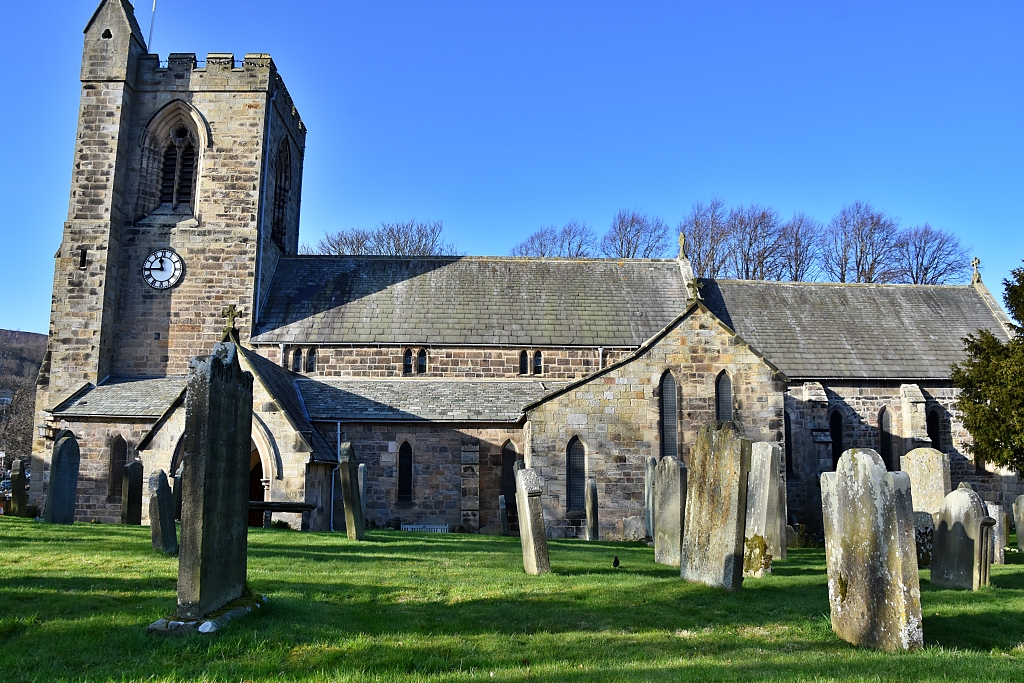 After looking around the church, take the footpath on the right-angled bend in the road down to the River Croquet. Turn right and cross the bridge back to our start point in the Haugh car park.

If you had a sticky pudding with your lunch and feel the need to extend the walk and take in more lovely riverside views, do not cross the bridge and continue along the footpath. If you follow the river, past the Beggars Rigg Car Park and picnic area, until it turns left sharply and returns to the bridge, it would add about another mile or so to your stroll. Return to the bridge and cross to The Haugh car park. 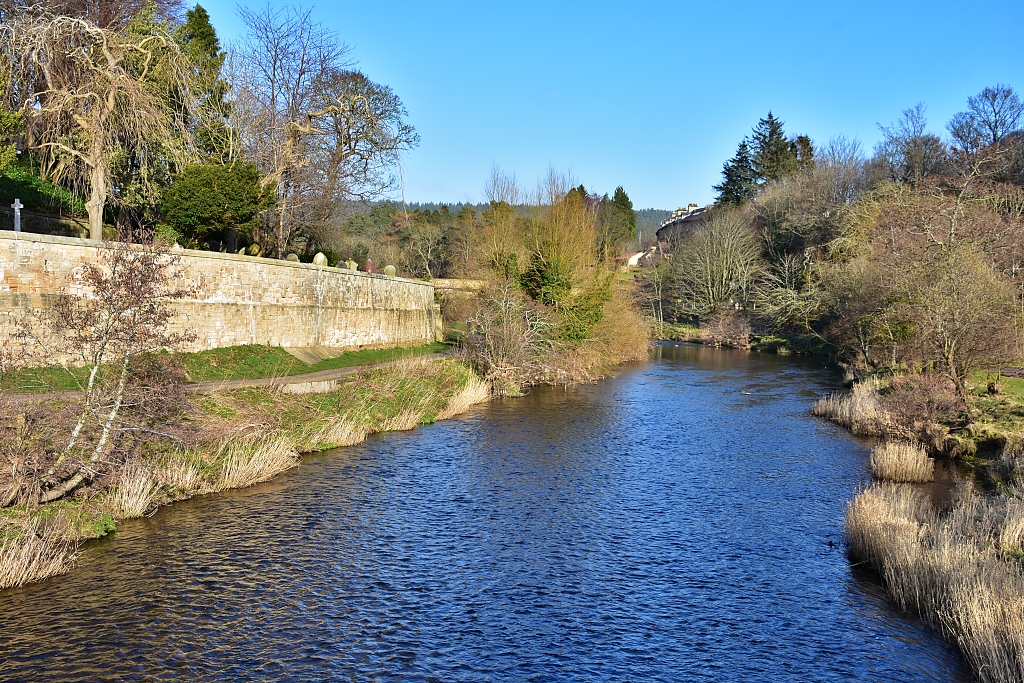 Our latest visit to Rothbury was part of a short weekend stay in Alnwick. We had breakfast overlooking Alnmouth beach, drove to Cragside and wandered around the house and gardens, and finished off with a stroll around Rothbury. It made a great day out, and luckily for us, the weather on this late-March weekend was lovely and sunny.

Places to Stay in Rothbury

Having stayed in Rothbury for one of our weeklong holidays, we can strongly recommend it as a base. It is easy to get to the coast and out into the Northumberland National Park. All this and it's in a peaceful location with good amenities in case you need something, or just don’t feel like cooking one evening. Here are some holiday cottage ideas. 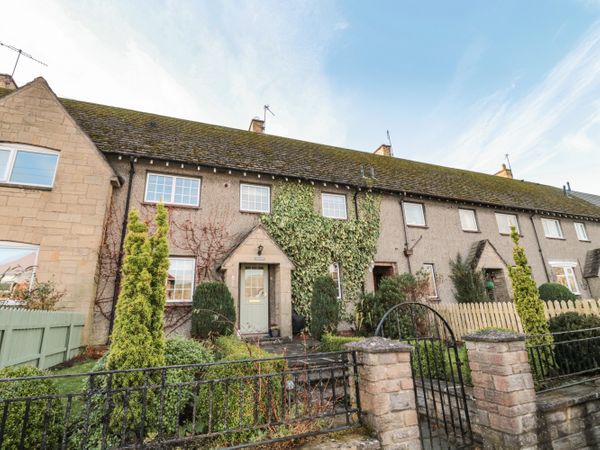 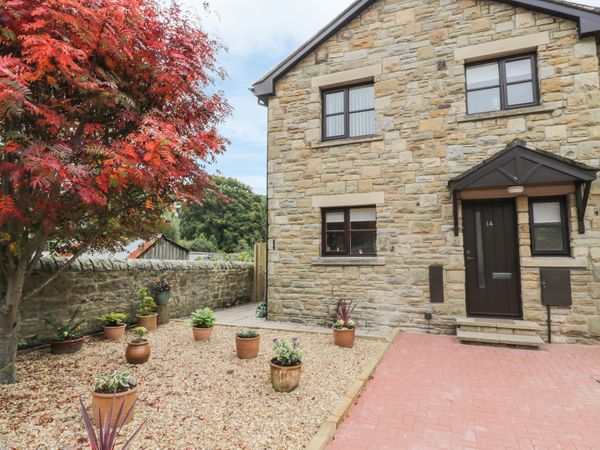 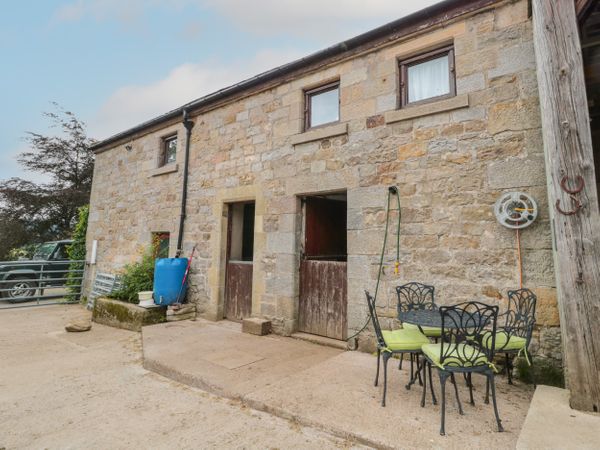 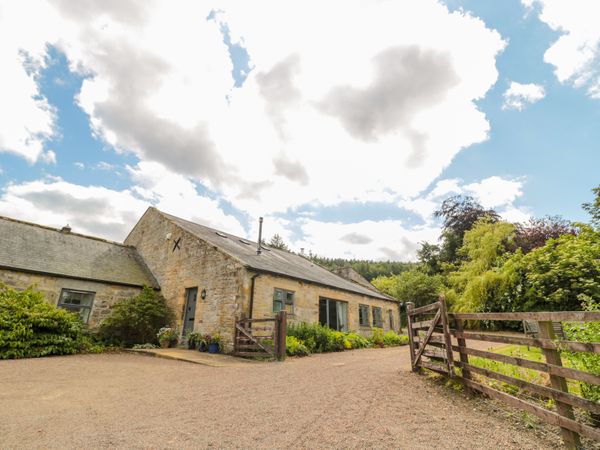 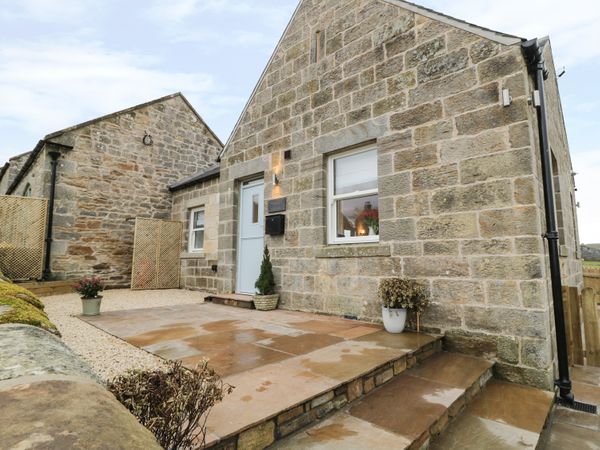 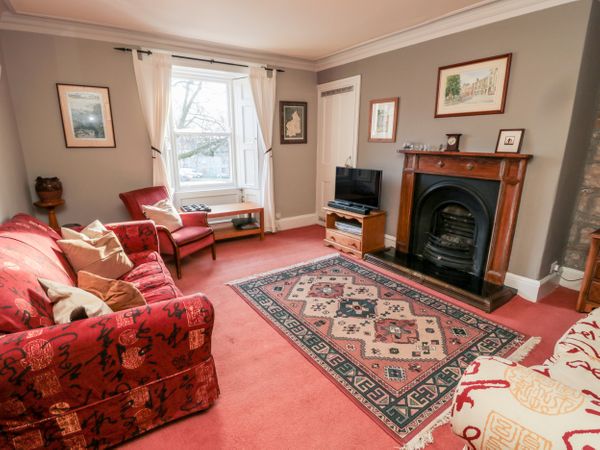 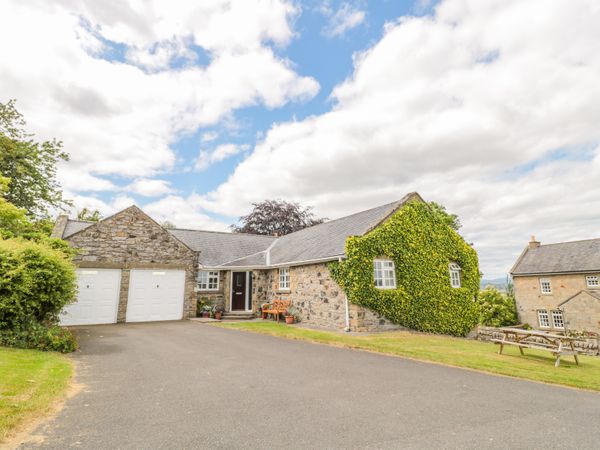 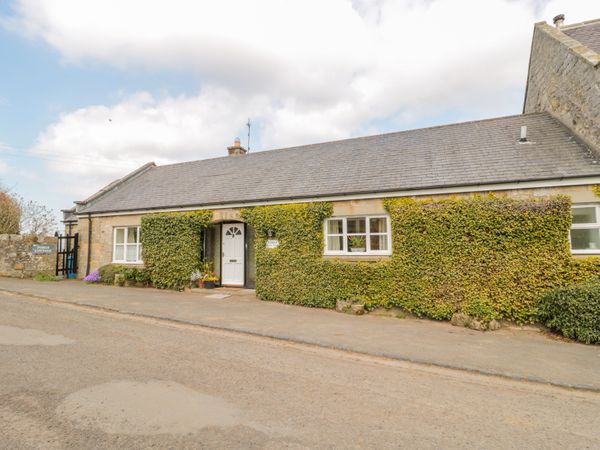 Naturally, you may prefer to stay in a hotel. Try using our Booking.com search box to try and find a lovely hotel in Rothbury.