A Day Out in Alnwick

Alnwick is a busy historic market town in Northumberland. At its heart lies Alnwick Castle, which has been the ancestral home of the dukes of Northumberland for over 700 years. But the ducal seat isn't the only reason for the town’s affluence. As Alnwick sat a day’s horse ride from Newcastle in the south and Berwick-upon-Tweed to the north, it flourished as a staging post. And today it boasts excellent shopping, friendly hostelries, grand stone buildings, cobbled streets, and narrow alleyways.

Our walk around Alnwick is about 2.9 miles long. It takes us from the town centre out into the countryside beside the River Aln with its fine views of the castle before looping back towards the town. We pass many sites of interest, museums and galleries, plus plenty of opportunities to stop for food and drink.

Combine this walk with visits to Alnwick Castle and Alnwick Gardens for a long, enjoyable day out.

Map of our Alnwick Walk

The walk starts outside The Plough on Bondgate Without and heads slightly downhill to Bondgate Tower, sometimes referred to as Hotspur Tower. This tower was part of the town's defensive wall, completed under licence from King Edward IV in 1480. Just before reaching Bondgate Tower is The Alnwick Playhouse, which was originally a 700-seat cinema built in 1925. 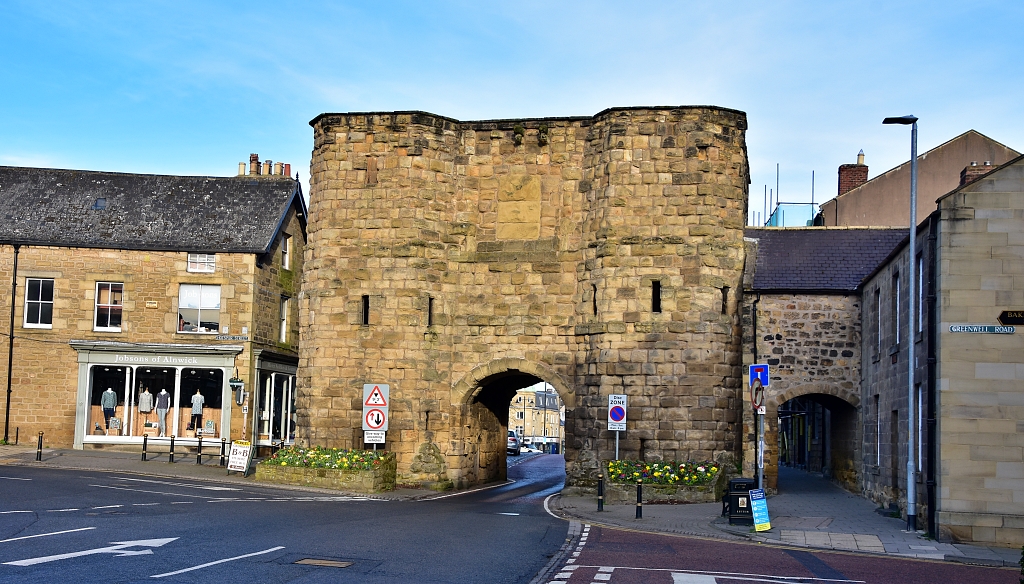 Pass through Bondgate Tower and onto Bondgate Within. I do love these street names!

We’re now in the medieval heart of Alnwick. This wide high street is very Georgian in style. Continue ahead to The White Swan Hotel on your right-hand side. I give this hotel a special mention because some of the furnishings used in their Olympic Restaurant are from the RMS Olympic, one of the sister ships of RMS Titanic, which tragically sank after hitting an iceberg on its maiden voyage from Southampton to New York. So, if you took lunch, afternoon tea, or evening dinner in the Olympic Restaurant you would be sitting in a similar environment to that of the Titanic. 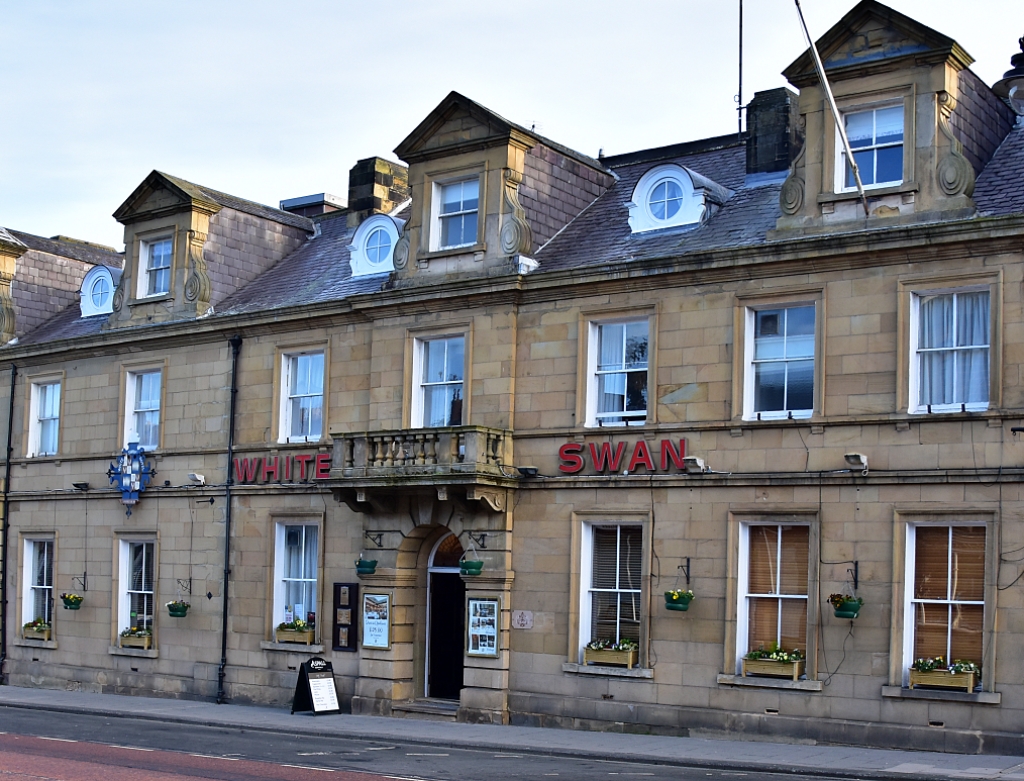 The White Swan in Alnwick © essentially-england.com

Our next stop is a little further along the street on the left-hand side. This is Robertson’s Pant, or the Adam Robertson’s Memorial Fountain. This working fountain was presented to the people of Alnwick in 1890 by Adam Robertson, a local politian and businessman. 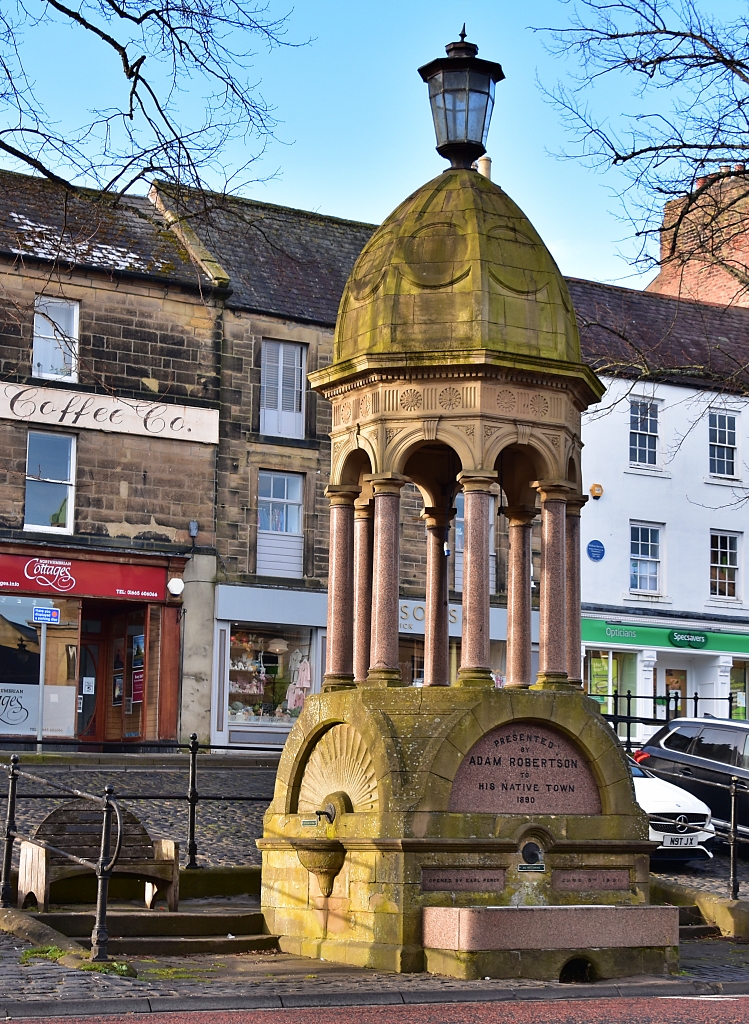 A quick mention for any fishing fans. At the junction between Bondgate Within and Market Street is the House of Hardy Fishing Tackle Museum. The Hardy brothers have been making and selling fishing tackle in Alnwick since 1874. 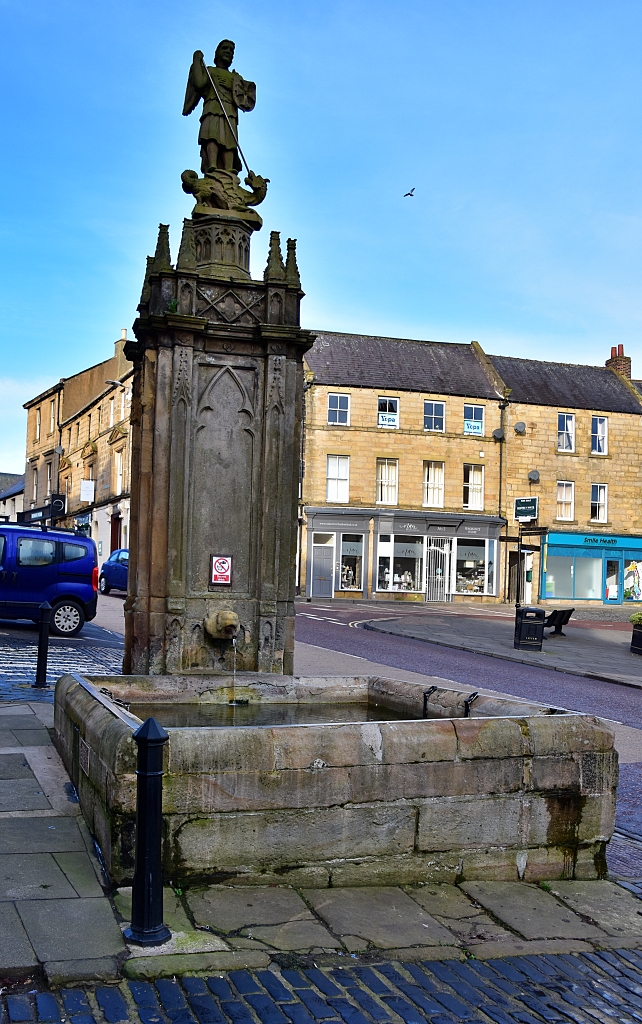 Keep to the left and walk very slightly uphill on Market Street, passing St. Michael’s Pant which was built in 1759, to turn right into Fenkel Street. Walk along to the clock tower which is part of the Old Town Hall that was rebuilt in the 1730’s. The earlier building had been used as a tollhouse and a brewhouse. The building is now used for social events. 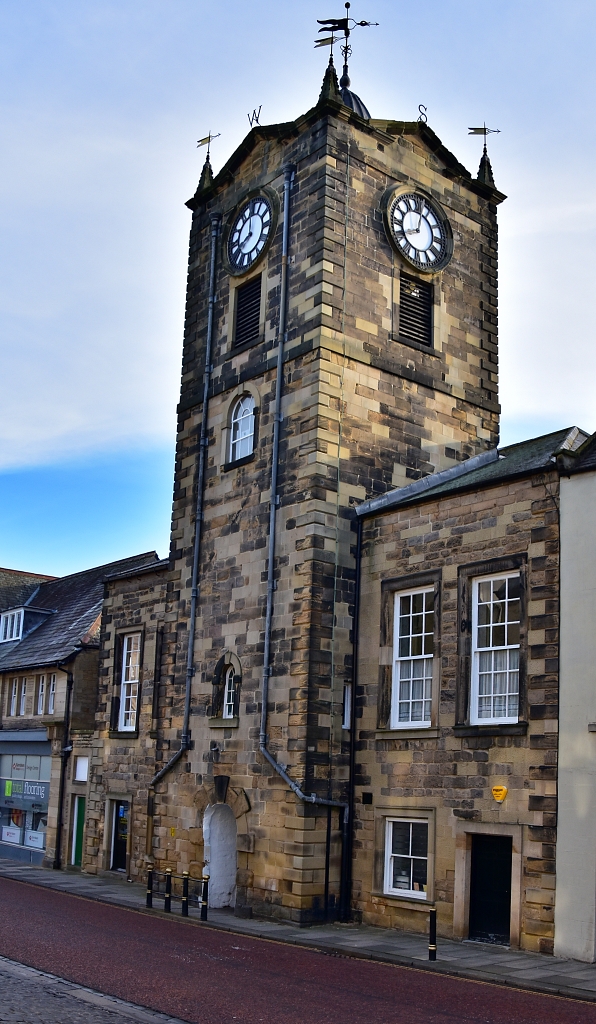 Pass through the narrow, arched passageway that runs through the Old Town Hall into the atmospheric, cobbled Market Place. Here you’ll see the splendid medieval market cross. The cross, which had its head replaced in the 1900’s, stands on an eight-step octagonal platform. Weekly markets are still held here all year round on Saturdays and on Thursdays between April to December, and there is a farmers market held on the last Friday of each month. There’s quite a buzz on market days! 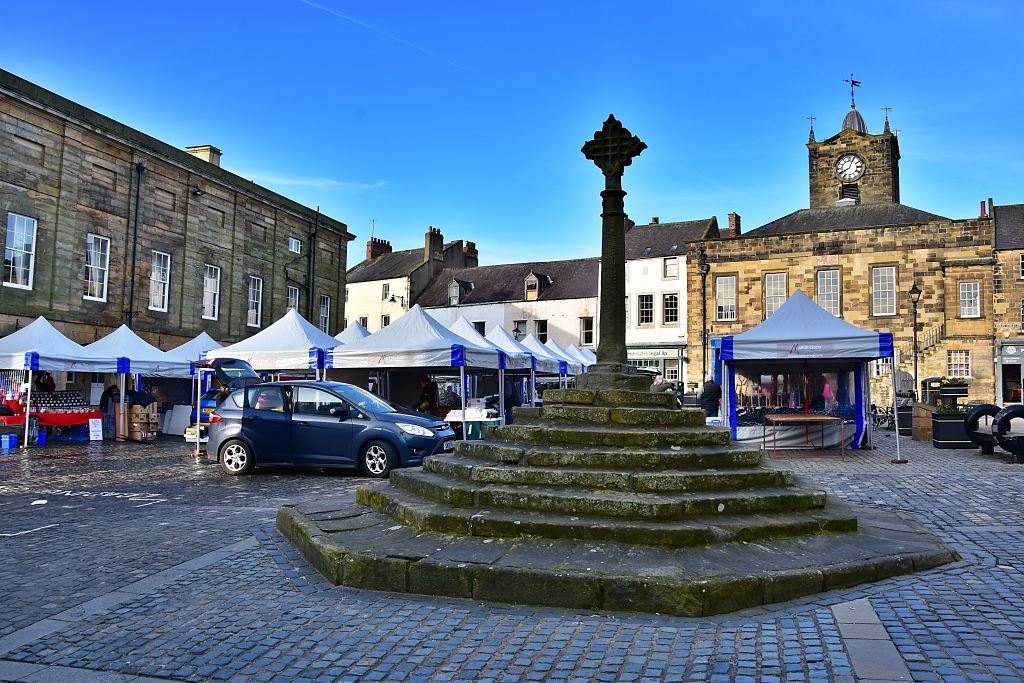 The Market Cross in Alnwick as the Saturday Market is Being Set Up © essentially-england.com

Continue past the Market Cross and down the alleyway in the left-hand corner of Market Place and re-join Bondgate Within. We follow this road until the junction with Pottergate where there are several points of interest. 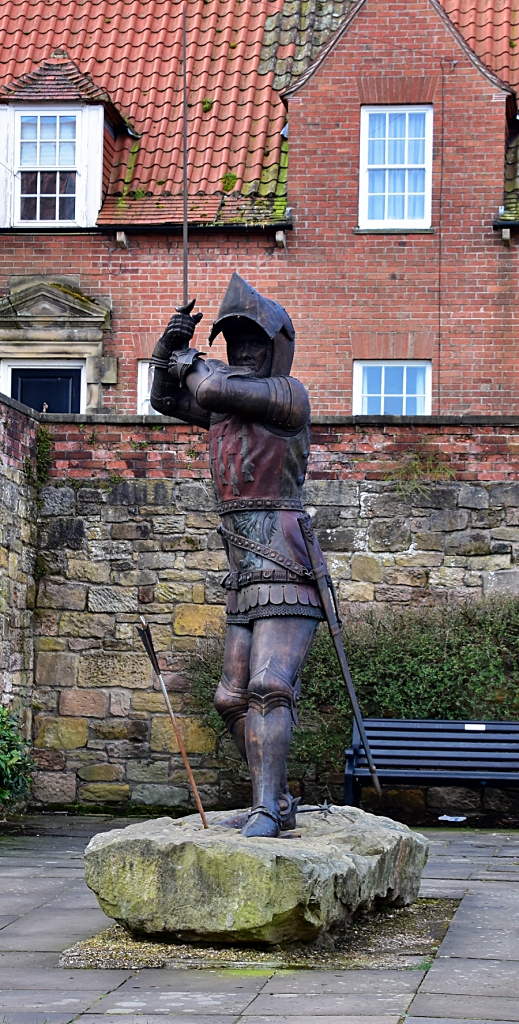 Firstly, there is the statue of Alnwick’s most famous knight, Harry Hotspur.

Henry Percy was born in Alnwick Castle on the 20th of May 1364. He was taught to fight as soon as he could hold a sword and was knighted by the King when he was 13.

Whilst fighting alongside King Richard II in Scotland during the 1385 campaign, his speed and bravery during battle earned him the nickname “Hotspur”.

Harry Hotspur supported Henry Bolingbroke's usurpation of the crown, but - hot-headed as well as hot-spurred - he fell out with King Henry IV.

He joined a rebellion against the king, and ended his life in 1403, slain by an arrow at the battle of Shrewsbury.

The water fountain at the road junction was given to Alnwick by William Dickson, a solicitor, in 1873. Up the slight rise in the road, you can see the Pottergate Tower. Walk up and take a closer look. The tower is not an original tower. It was constructed in 1768 on the site of one of the old town gates. Return down the slope to the fountain.

Thinking about it, this is the third water fountain (or Pant) that we have walked past within half a mile. The Alnwick folk must have been thirsty people back in the 1700/1800s! 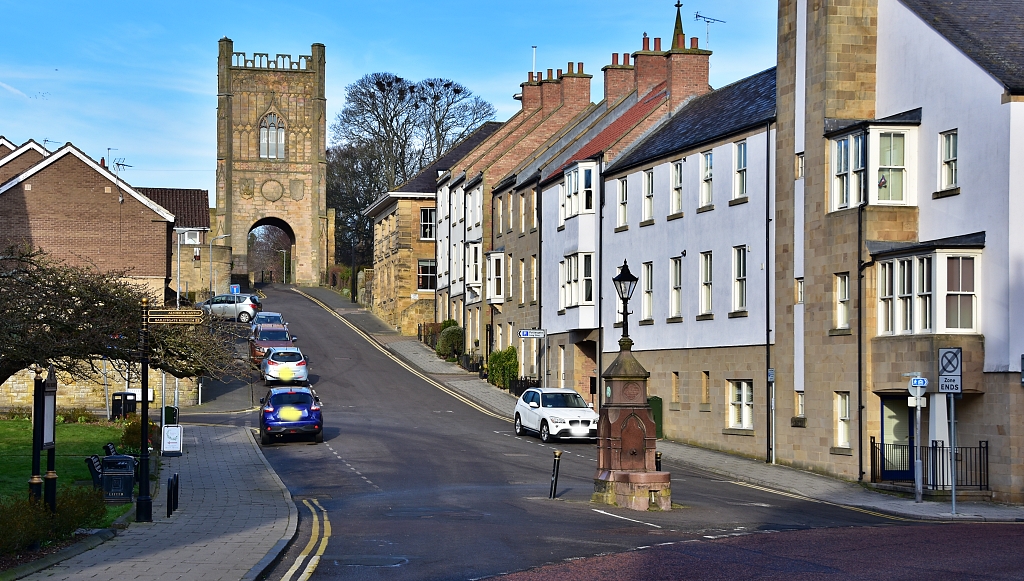 Opposite is The Dirty Bottles where you can eat, drink, or stay. However, the reason I’m pointing it out is because of a curse. The building is believed to have been built in the 1600s and was used as a pub for the last 200-odd years.

It used to be called Ye Old Cross Inn, which you can see over one of the windows. However, its current name comes from the curse of the dirty bottles. Apparently, 200 years ago, the innkeeper died whilst meddling with some old bottles in the inn's window. His widow cursed the bottles, saying that if anyone touched them, they would also die. Since then, “The Dirty Bottles” were protected between two windows and have remained untouched. 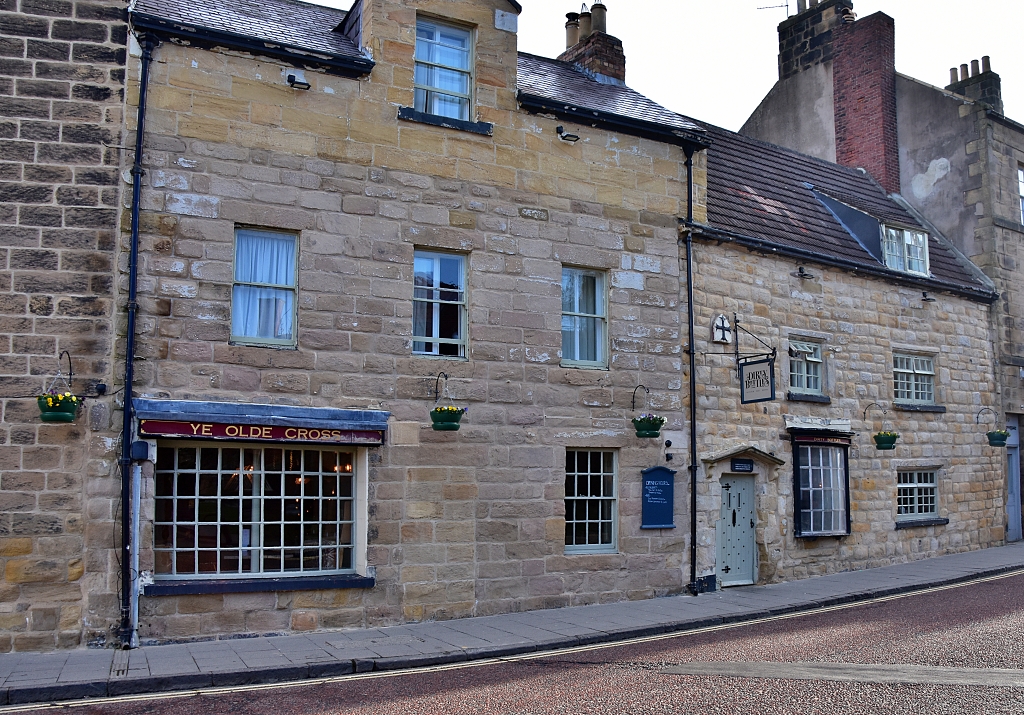 The Dirty Bottles in Alnwick © essentially-england.com

We turn left and walk slightly uphill on Narrowgate towards the grand Gatehouse of Alnwick Castle, home of the Duke of Northumberland. After Windsor Castle, this is the second largest inhabited castle in England! 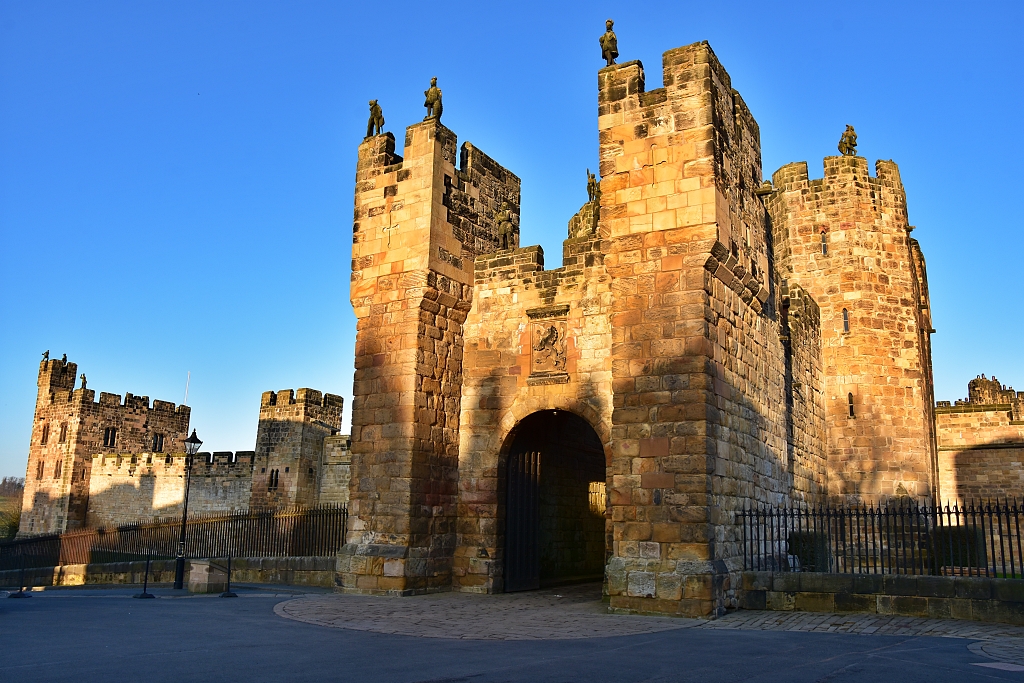 After visiting Alnwick Castle, continue along Bailiffgate to the Bailiffgate Museum, which is an old church building. Here you can learn more about Alnwick and its local history.

Continue along Bailiffgate to the 15th century St. Michael’s Church, which is included in the “England’s Thousand Best Churches” book.

Now for the countryside section of our walk!

Return to Alnwick Castle Gatehouse, turn left down The Peth, and walk to The Lion Bridge. This lovely castellated bridge over the River Aln was built in 1775.  On one side of the bridge proudly stands the Percy family lion. You also get a great view of Alnwick castle from here.

Cross the bridge and pass through a kissing gate to join a footpath that runs beside the River Aln. On your right-hand side looms Alnwick Castle in all its splendour.

Follow the footpath alongside the River Aln until you come to another kissing gate. Turn right, join the road, and walk over the bridge crossing the River Aln. You’ll notice that this bridge is not as grand as The Lion Bridge.

Along this road, you will pass the entrance to the famous Alnwick Gardens. This award-winning, 12-acre garden was created by The Duchess of Northumberland. It's famous for the Grand Cascade water feature, the Poison Garden, and the world’s largest Treehouse Restaurant.

Our walk continues along the road to the War Memorial. Turn left and walk through a gap in the wall and follow the parkland path up to the Tenantry Column. 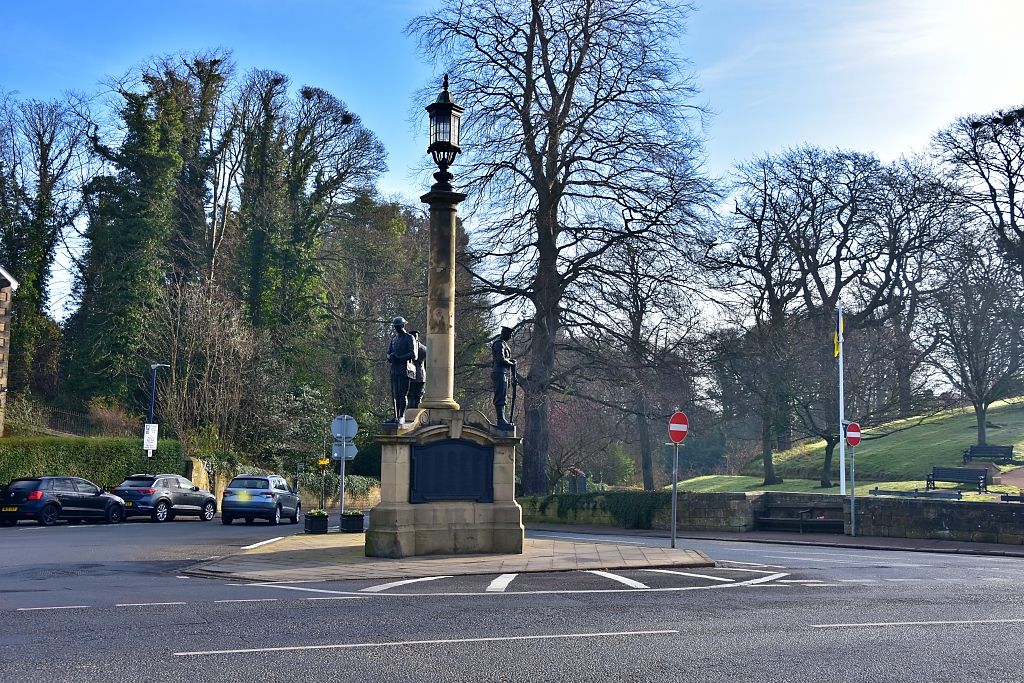 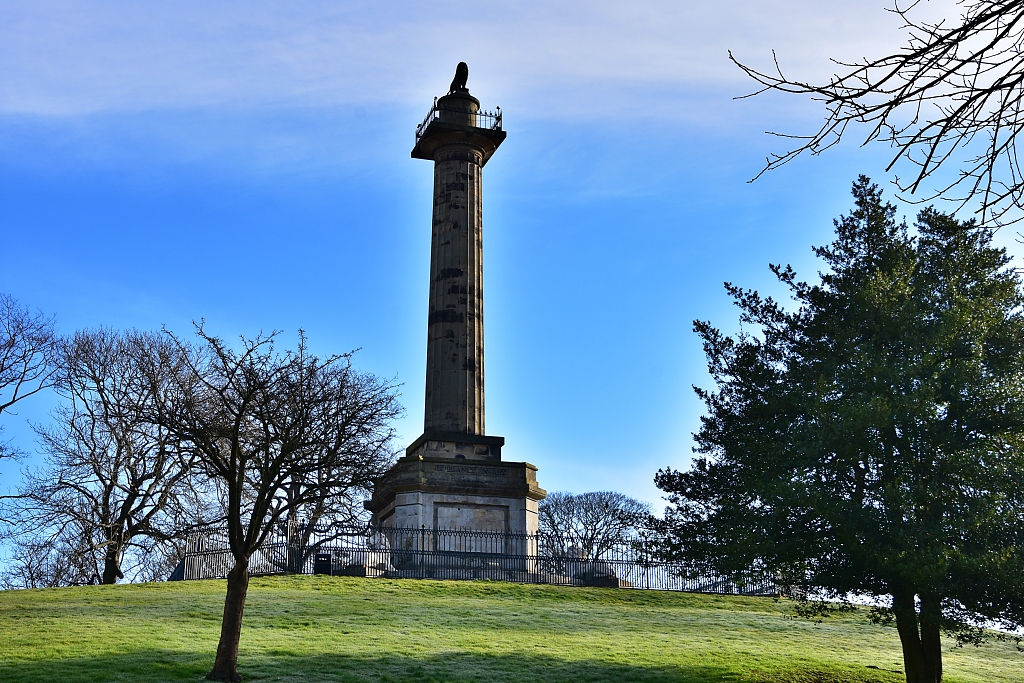 After the Napoleonic Wars of 1803 – 1815 the price of agriculture goods fell and to lessen the hardship on his tenants, the Duke of Northumberland reduced their rents by 25%. As a way of saying thank you, the tenants funded and built the Tenantry Column in 1816.

Return to the War Memorial and carefully cross the main road using the traffic island. Once on the other side of the road, turn left to cross another road to the entrance of Barter Books. 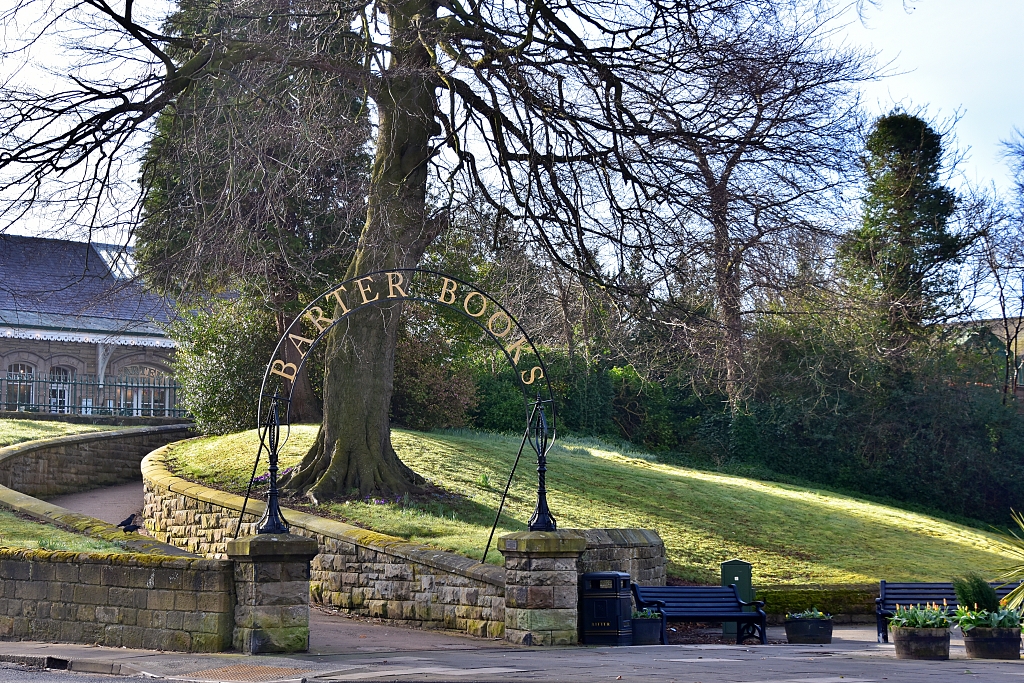 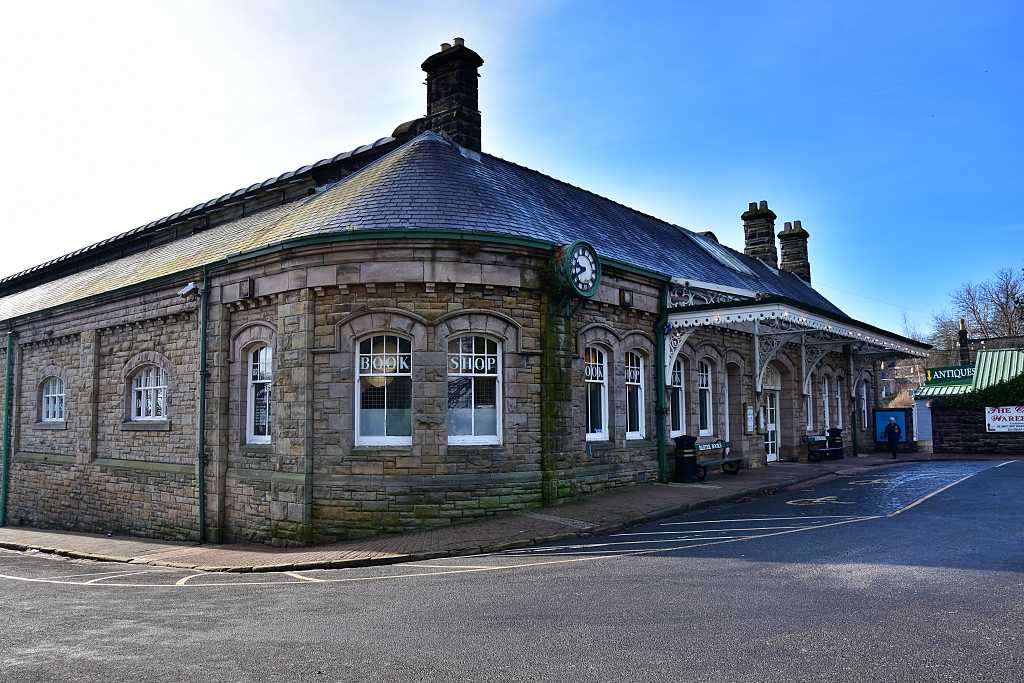 To be honest, calling this article “A Day Out in Alnwick” is a little misleading, since we - and probably many of our readers - could easily spend the day in this wonderful second-hand bookshop! Barter Books, which claims to hold over 350,000 books, has found its home in the old Alnwick Train Station building. The interior of the old Victorian station building has been beautifully restored, and you can comfortably sit and read all day with your favourite hot drink and snack. Around you model trains run on top of the bookshelves and in the colder months you can sit in front of a cosy open fire. Bliss!

Once you prised yourself away from the book shop, return to the main road and walk back down towards Bondgate Tower in front of you, and to the starting point outside The Plough.

Where We Stayed in Alnwick

We’ve visited Alnwick several times during holidays in Northumberland, but never stayed there. For our two-night weekend stay in March we chose The Plough through our affiliate scheme with Booking.com. Our reservation worked out perfectly and the room was clean, tidy, and quiet, even though the pub and restaurant were busy. After our busy days out, we relaxed and had two fine evening meals in The Plough. We would have no problems in recommending The Plough. 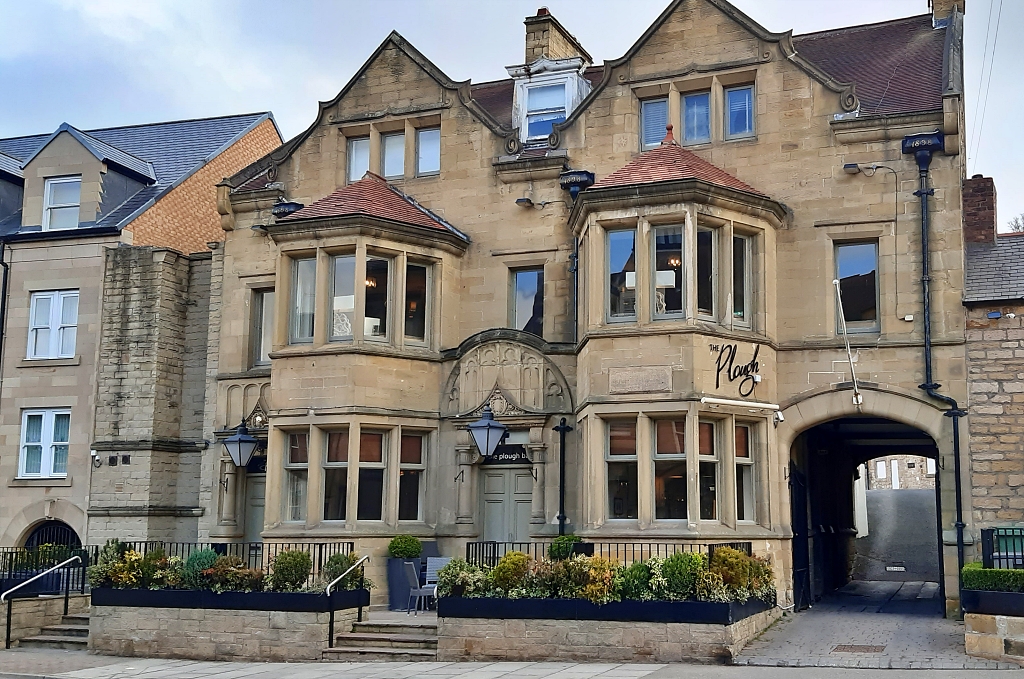 Here are some ideas of other things to do around Alnwick.


We hope you enjoyed reading about Alnwick.