Christmas in England is a magical time. Yes, it's dark and the weather can be miserable. Yes, it's hectic and yes, it can be commercial. But what makes it truly amazing are its many traditions: those we all share, and those each family has developed for itself.

Our traditions tell us much about how our forebears saw the world. They tell us of their beliefs, their quirky sense of humour or their courage when times got tough.

For me, Christmas is all about lights and music. Every day during December, just as dusk blurred all the edges, my mother would light the big, dated Christmas candle, put on some Christmas music and allow herself an hour of peace and quiet. Blue hour, she used to call that. I suppose we'd call it twilight now.

It seemed an odd sort of ritual when I was younger and rarely could sit still for long, but when I do this now, I feel a strange sort of connection with the past, with my mother, with things that were...

Most families have such traditions of their own. They may be quirky, or sweet, or a little bit silly... but it would be a shame to lose them, because they're what makes Christmas in England so special.

Wishes up the Chimney 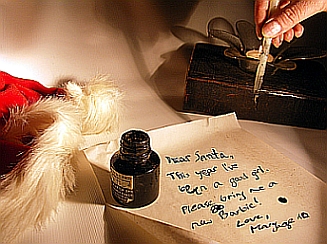 How is one to contact Father Christmas (also called Santa) to tell him one's dearest wish when the man is so busy and so elusive?

Well, English children have that one covered. They write a careful note to the man in red and send it up the chimney to be collected by reindeer mail.

But English children are not the only ones to write letters during December. The Royal Mail handles millions of Christmas cards every winter. We send cards not only to family members, but to many of our friends - even if we communicate by email and phone for the rest of the year.

The cards we receive are propped up on the mantelpiece, hung from the banisters or displayed in elaborate holders, such as these ones below:

Christmas in England is celebrated during the darkest part of the year, so lights have always played a big part in the celebrations. We light candles, decorate our homes inside and out with light and - of course - fit lights to the Christmas tree.

Many towns put up special 'Christmas lights" during the winter months and the official switch-on is often a most cheerful party. 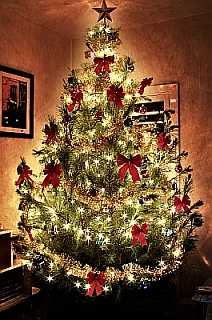 Blackpool and Oxford Street in London have some of the most celebrated Christmas light displays in the country. So if you're here during the festivities, wait until it's dark and then have a look.

But don't despair if you're nowhere near the fabled lights. Many people light up their homes and an evening stroll through the town or village you're visiting can yield some amazing sights.

Most families will put up a Christmas tree - sometimes a couple of weeks in advance of Christmas - and decorate it beautifully with lights and charms and baubles of all kinds.

Towns, shops and big corporations are not slow to join in.

And the huge Christmas tree that proudly stands in Trafalgar Square arrives every year from Norway with good wishes from the Norwegian people!

Christmas in England is a magical time for children and most children love to meet Father Christmas. Most of the time, he can be found in his grotto, with a reindeer or two close by. He's friendly but stern, and if his long white beard is made from cotton wool, that does little to spoil the picture.

Sitting on Santa's knee is an experience for any child, and for the parents it's a small, cheerful break in the rigours of shopping. Shopping centres are busy in the run-up to Christmas, but they're also beautiful.

Besides Santa Claus and the multi-coloured Christmas lights there's often music. Local choirs or a brass band - where we live it's the Salvation Army one - turn out to brighten the afternoons with Christmas carols and you can often see people stop and sing along for a few minutes, caught in the spirit of Christmas in England.