Christmas Food
Adding a Tasty Sparkle to an English Christmas

Humans are social animals and crowds and food have gone together since we started living in communities. Sharing food is a common part of many celebrations, whether they be personal milestones or seasonal or religious festivals. Special recipes are associated with many festivals and there are few celebrations that draw on traditional food as much as Christmas. In Britain, similar Christmas traditions are followed all across the country. Some of them date back to the Middle Ages, while some are more recently Victorian.

We have traditional Christmas foods for every part of the Christmas celebrations.

Mince Pies, a pastry crust filled with sweet mincemeat are offered at tea time, carol concerts and Christmas parties all the way through the Christmas season. Dainty canapes and the best of English cheeses are served at Christmas parties and family gatherings alike.

While Christmas cake and the world-famous Christmas pudding - flamed with cognac and served with cream and brandy butter - usually round off the festivities - supported by more mince pies and maybe a traditional sherry trifle, syllabub or chocolate yule log.

Many of the traditional Christmas foods, such as mincemeat, Christmas cake and Christmas pudding are better for being made weeks in advance and being left to mature. Fragrant with Christmas spices, studded with dried and candied fruit, and laced with alcohol ... these are truly festive foods that would have done a Medieval king's table proud.

So, what else is on the menu over the festive season? 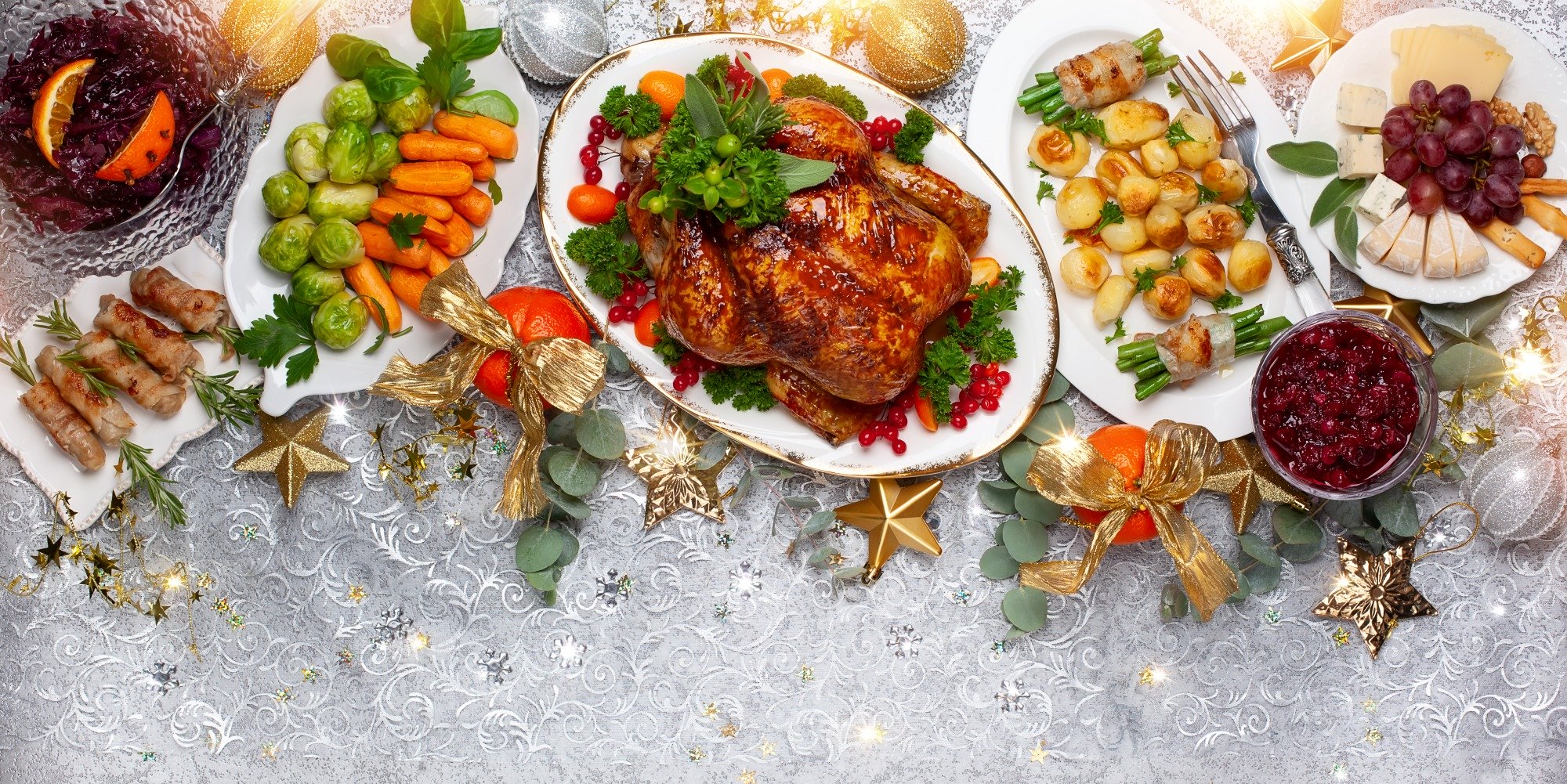 For most families, recipes for Christmas dinner include roast turkey with all the trimmings - that's sprouts, roast potatoes, carrots, chipolata sausages wrapped in bacon, chestnuts, and bread sauce and cranberry sauce. This is followed by either Christmas pudding or a Christmas trifle and later tea, coffee and mince pies.

But away from the very traditional, there are many variations. Not everyone likes turkey. Roast goose and duck - very popular in the Middle Ages - are still the preferred choice in many families, as is roast beef or fish. And the many Vegetarians in England are developing their own traditional dinners. 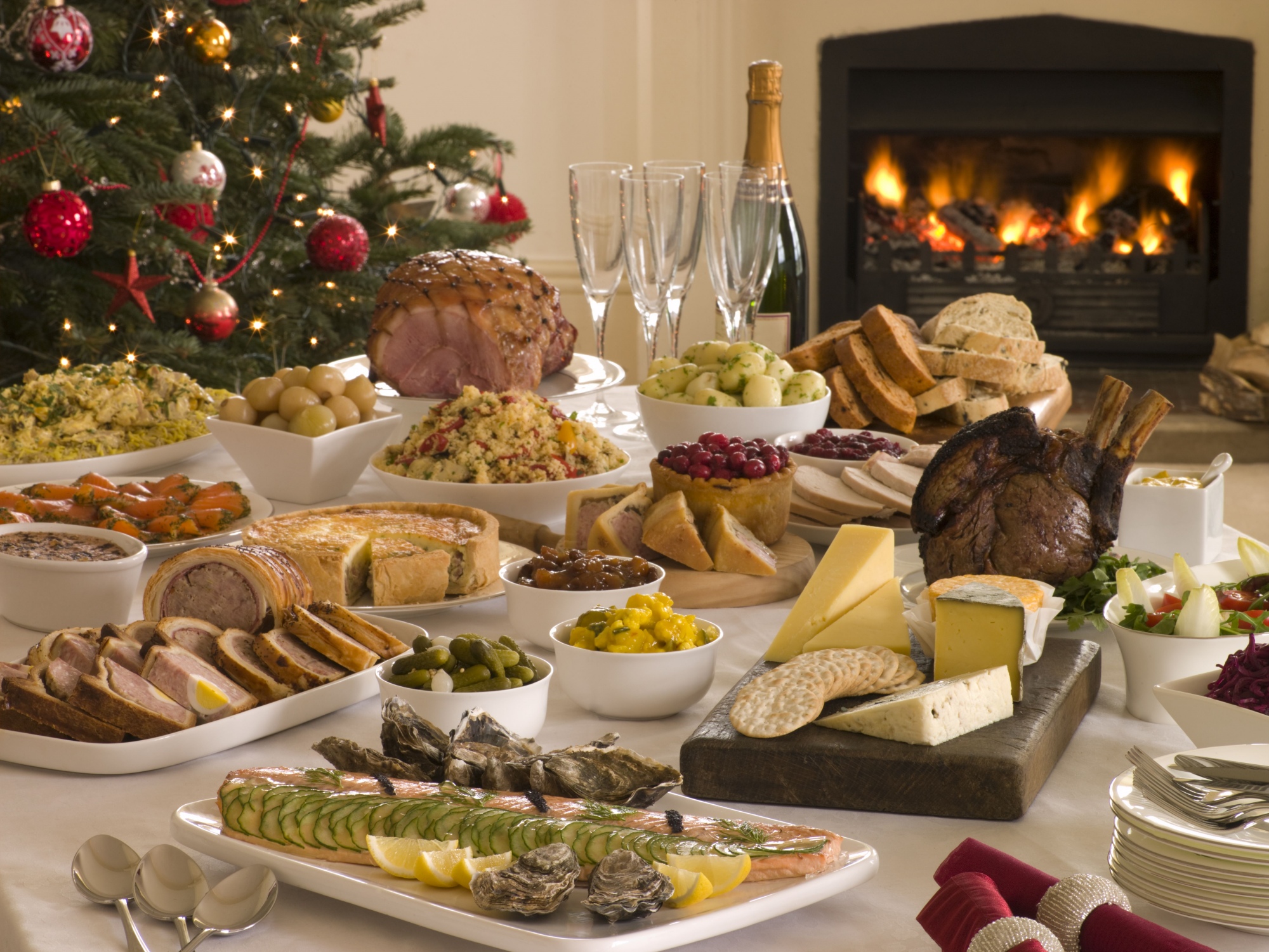 On Boxing Day, which is all about taking it easy after the cooking and baking sprees, lunch and dinner are often served buffet-style. A baked ham could take centre stage, served cold with salads and pickles and Cumberland sauce. Some families love to serve poached or smoked salmon, or a large pie.

And all around the house there will be nibbles, and mince pies, and sweets and nuts and - of course - chocolate! Christmas would not be Christmas without chocolate.

And as for drinks... mulled wine and mulled cider go extremely well with mince pies and keep out the cold. A claret cup would make a very good starter to the Christmas festivities, while a glass of Sloe Gin would make a very tasty ending.

Christmas Foods are only a small part of an English Christmas ... go explore some more!
Or check out my little survival guide of Christmas Food Essentials to make sure you're well prepared for the festivities.